As I mentioned yesterday, Izzy got a day off. It was partly because I had this ridiculous schedule that left me with 20 minutes to tack up, ride, and put her away, and partly because I didn't even want to deal with her.
It's not that she's been so bad lately (although she has), but because her left front was puffy. Being the logical, rational person that I sometimes am, I immediately leaped to a Kristin and Laz styled scenario. I didn't want to know any more about it and Stephanie told me she'd wrap her leg before leaving for the night, so I left Izzy in her stall and instead watched a dressage lesson for 20 minutes.
Thankfully, Stephanie didn't let me know that when she went to wrap Izzy's left front fetlock, the problem area, both front legs were puffy, particularly through the tendon area. Izzy was sensitive and sore and seemed quite happy for the extra attention. I say fortunately because I would have promptly freaked out, left the family gathering I was at, headed to the barn, and continued freaking out in the cold to no specific end.
Instead, I showed up this morning to find that both Izzy's front legs had been bandaged, but Ms. Mare had started removing the bandages. I left her alone while I fed and started the turnouts because I know she's way too smart to do anything to hurt herself. Then I unwrapped her, bracing myself for the worst.
I should have taken a picture of Izzy's cold, tight legs. She looked perfectly normal standing still. Stephanie had me jog her out, and said it looked like she had a grade 1 (non severe) lameness in her right front, but despite lots of manipulating and palpating, even the drama princess mare didn't have a response to any localized pressure.
Mostly likely, the limited turnout induced by the rather icy conditions mean that Izzy isn't exercising herself at all. That would explain why she was completely wild under saddle on Sunday and why when I turned her out in the indoor on Monday (had a hunch) that she galloped and bucked like a maniac. Unfortunately, galloping and bucking like a maniac in soft footing is not the best for soft tissue and she probably tweaked something. 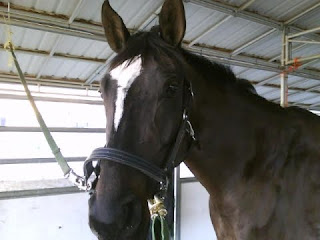 Due to the low grade stiffness and Izzy's gorgeous legs this morning, the best thing for her is to go back to work and sleep in bandages for the next few days. She tried to get a couple mashes and a pool boy, but no luck.
The wondermare, chilling out.
Posted by SprinklerBandit at 3:28 PM