WE HAVE NEW COURAGE PICTURES!!!!

First off, I want to do a little comparison.

This is Courage, still on the track, the night before he came home. He is racing fit and looking fabulous. He is tucked up like a greyhound with an under-developed neck and he's on high alert.

Contrast that with a conformation shot from last week.

His neck is thicker, he's put on weight, his tail is growing, his shoe job is different and he carries himself differently.

His winter coat is substantially darker than his summer look--from almost buckskin to bright bay.


He's still gorgeous and his muscling is going to change plenty more as he works more and more correctly. I knew he'd look different, but these side by side images totally blow me away.

Now, a little look at how he's working these days.

At the trot! Ellie takes a mean trotting picture, regardless of whether she's shooting grand prix dressage or mules. That said, I love this shot of Courage!

He's starting to figure out how to be the best at trotting. We have moments of relaxation and forward and the moments are starting to last longer and come more frequently.

Sometimes it's hard for me to see his day-to-day progress, but shots like this absolutely capture the horse he's becoming.


Our canter is coming along, too. I haven't pushed the issue too much, because I think it's better to let him figure life out in his arena comfort zone (the trot) instead of trying to force him to do something in the canter. He's balanced and rhythmic and the rest will come in time.

That said, the better he gets walking and trotting, the more comfortable he is trying things in the canter. It is absolutely KILLING me to not be cantering fences with him right now, but it's more important to get him relaxed and confident than it is for me to play with his perfect naturally-uphill canter.

I'm running a delicate balance right now--Courage is more physically able to go forward now than before, but because it's a new concept for him, he isn't quite comfortable at the rhythm I want. I can push him constantly to go forward, but then he gets tense and resists the pressure. I don't want that.

For now, I'm trying to gradually increase his comfort zone. He is the sort of horse that likes to go forward and he loves the chance to earn praise. I'm working to build on that. I get him soft and balanced where he's comfortable, then ask for a little bit more. He only sustains it as long as he's comfortable. I only ask him when he's balanced and I don't punish him for losing his balance or slowing down.

It may be slower than cramming him into the frame I want and spanking him forward at every opportunity, but it seems to be working for him. He comes out willing to work and he's slowly making progress.


I have so many beautiful pictures to share, but this post is getting a little long. Let's just look at one more. Since Ellie was on hand with a camera, I really wanted to pop Courage over an oxer and see what he gave us.

We built it up gradually--poles, then crossrail, then added the back bar.

The little dude never even blinked. Here he is, cantering across his first-ever oxer. I thought he'd look at it a little or overjump the first time or you know, react.

But no. I should have guessed--he is the best at oxers. ;) We measured it when we were done. At a whopping 2'2", it was the biggest thing he's jumped so far.

What a guy. It's hard to believe that he's just two months into his new life. Nothing we've done is earth-shattering for the average trained horse, but for an OTTB fresh off the track, I'm thrilled. What does a non-racehorse do after two months of training anyways? 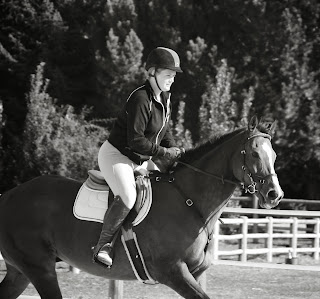