Whew. What a weekend. I'd drag it out into a ton of multi-day posts because I definitely have enough pictures for that, but I also have a schooling show Wednesday and content waits for no man, apparently.

Let's just jump right in. While auditing the (really fantastic, highly recommend) Jan Byyny clinic on Friday, I had the revelation that no one really likes having money anyways, so I might as well pay for a stall and bring Courage to the show a day early so he could see the sights.

He hacked around and was pretty freaking good.

Then came show day. Due to my very large and advanced division needing to get going (ok all two of us in ground poles), I was the very first ride of the day. It was great--I was the first person on the grounds, first in the arena. Everything was calm and quiet.

And OMG YOU GUYS you should have seen my horse. I sure didn't recognize him. I hand walked him once around the arena, hopped on, and like... he was perfect. Rideable. Rateable. Relaxed. Balanced. It was the same horse I had for my completely fabulous schooling ride at home two days prior.

WTF HOW IS THAT EVEN POSSIBLE I CANNOT EXPLAIN

I'm not complaining--I was 1000% THRILLED to have that horse. I just had absolutely no illusions he was going to show up prior to actually seeing him.

My goal for dressage was to keep my brain engaged and ride, no matter what.

Courage made it easy. I mean, yeah, it's intro A and there is nothing inherently hard about it. But still. Instead of hanging on for dear life and trying to channel his greenness, I was asking for more and better throughout the whole ride.

Our free walk is only so-so at home. I got the best free walk I've had in weeks IN THE FREAKING SHOW RING.

We did get a 5 on one circle because I completely forgot how to ride in the small arena (oops, #dressagebarnproblems), but we got a lot of 7s and even an 8 on our last centerline.

The test felt kickass and it was.

Plus we got 7s on all our collective marks (except geometry. That was a well-earned 6.)

I am so thrilled with this. I can't even tell you. It really didn't matter what our score was (32, if you're wondering). It was just that Courage brought his A game to his first show of the year (also third show of his life) and OMG I know I can't expect that every time, but given all we've been through lately?

It was a moment of "Hold on, you're doing the right thing" that I really needed.

Which I informed all my friends they were not allowed to call XC. It was a f****** trail ride.

Because I knew if I thought about it or said anything, my brain would completely implode.

I tried really hard to talk myself out of the nerves, but yeah. It's a good thing we entered ground poles, because I was about an inch away from full on meltdown mode by the time we were tacking up.

Of course, then I put my saddle on and looked at my beautiful blue iridescent Lorenzini stirrups and for a moment, it was really peaceful as I was like "I so love these stirrups and I feel so secure in the saddle with them".

And then back to brain melt.

It's ground poles. And hacking. And I can do it.

I survived the warm up. Courage was tense for like 2 seconds and like "hey look there's horses galloping around" and then he was over it. Totally fine.

Again, my goal was just to use my brain and keep riding the whole time.

Off we went. I walked the first pole, trotted the second, walked the third. Things we going well. My brain was still screwed in and I was starting to breathe and be like "ok we can do..." 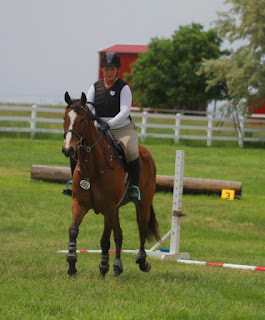 ...and the next pole was in between the UBER SCARY JUMP JUDGE and OMG F****** COWS (on the other side of the fence).

Courage spun around as fast as he could and headed for the barn.

I yanked him back around, but failed to put any leg on. We made another very fast and tiny circle and then I was like "I AM NOT GETTING DISQUALIFIED OVER COWS YOU M****** F****** S*** HEAD HORSE" and stuck my spurs in him and then he was So. Polite.

It was never about the cows. We walk/trotted the rest of our course. We had no other problems.

I even thought about cantering at the end, but I didn't. I felt it was enough of an accomplishment just to finish. Something. Finally.

The truth is, if I started the course with the same grit that got us over that one stupid pole, we wouldn't have had any problems at all.

But the other truth is, it was all I could do to get out on that course and it took until pole #5 to have enough gumption to growl at him and make it happen. That's the sad truth of me and XC. It's why we aren't even trying to be eventers. We were at this show for exposure. And that's it. 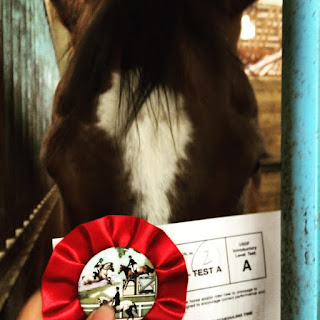 I unfortunately blew my tidy lead after dressage and dropped to 2nd after the incident in the field.

But you know what?

I have never been prouder of a second place ribbon in my life. I kept my brain on and I rode. Courage responded well. He's not ready to just pack me around, but he's green (and a jackass) and that won't happen for a while yet, if ever.

We were a team, we both showed up to play, and we can be successful together.

It's a little piece of satin that tells me all this work is worthwhile, and if we keep at it, I won't regret hanging to this special little horse.

Posted by SprinklerBandit at 7:54 AM