I've gotten a lot of questions about our latest round of show-fail, so here's my stab at addressing them in a more or less coherent way. I'm doing this in the most dickish way possible by interviewing myself. Questions are compiled from various sources and not exact questions from any one person.

Q) How do you feel about Courage now?
A) About the same. I've put a lot into him. I believe in him. I was disappointed and sad for a day, but failures are going to happen and I still have to move on. He's still cute, I'm still here, and we're going to figure this out. 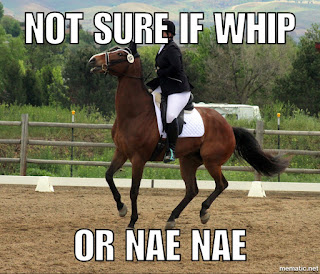 Q) Does he have X vet problem?
A) Last I checked, vets had to actually physically check horses for problems (vs think about them on the internet) and to be a vet, they had to attend some sort of "schooling". I dunno. Never wanted to be a vet, so never looked into it. Regardless, I think medical advice needs to come from medical professionals. Either you assume that I am a good horse owner and deal with my horse responsibly or you assume that I am a shitty horse owner and don't. Either way, I generally don't take medical advice from strangers on the internet. I'd say you shouldn't either, but then I'd just be making a funny meta joke.

Q) How is this any different than the Hellmare?
A) If you've been around here long enough (YEARS), you might remember the Hellmare. She was actually remarkably physically similar to Courage if you disregard their plumbing. Well, that and the fact that she was pure evil. Courage has OPINIONZ. Izzy would actively try to kill me. I realize that might look the same to an outsider (or if I'm not writing well), but it works out to the difference between Courage letting me slide back in the tack after an incident and Izzy jamming me face-first into a rocky field because I was SLIGHTLY off balance. Intent is how they're different. Intent matters. 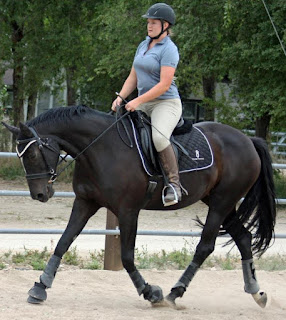 Q) Are you going to sell him?
A) No.  Even if I wanted to, which I don't, it would look something like this: for sale: older busted-up ex-racehorse with no professional training and no useful skills. Prone to bolting, leaping, and expressing himself. Not talented enough for pro, way too much for most ammies, doesn't take kindly to kids, not a jumper, hates trails. NO ONE BUYS THAT. 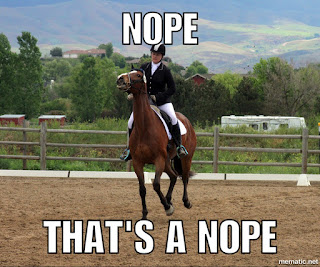 Q) Aren't you a terrible person because your training philosophy is slightly different then mine?
A) Of all the reasons I might be a terrible person, I wouldn't put this one that high on the list. YMMV.

I'm not going to sit here and lie to you and say that it's all butterflies and roses. It's not. I was really upset. Because I have a long, LONG junior career of being really terrible at shows, I can't say it's an unfamiliar feeling, which probably helped me rebound faster.
I'll also admit that I was pretty damn jealous of the kid bopping around on the haffie pony while Courage flipped his shit, but then that ended right when the pony dirty bucked it's kid off and galloped loose through the warm up.

So here's the thing: horses are horses and from time to time, they're going to horse in ways we don't like. That's true whether you ride Valegro, Courage, my beloved Paddykins, a European Sex God, or a mule. The important thing is be sure that when you have those moments, you can deal with them.
People with more means than myself can pay trainers to fix the bad parts, but I need to be able to ride through them. With Courage, I can (so far) handle it myself. He's athletic and can be a bit nutty, but he's never out to hurt me intentionally. I know what his range of reactions are, and I'm reasonably comfortable with them.

So yeah. I could try to get something else, but no horse is perfect and frankly, I like the the one I have.