Well.
I rolled the dice and mailed an entry for Courage and I do do first level. Together. In public.

At a schooling show, but it counts.

I've been avoiding actually looking at the tests because I know they're harder than "do three gaits and a stretchy circle", which is our safe place right now.

But I need to learn these suckers by like... Saturday. Which is actually pretty soon. So I finally looked at them. Ok, one of them. And then the other one.
And uh.

They are using letters in the test that I sort of knew existed, but had never paid any attention to whatsoever and have no actual idea where they are in the ring.

Also in test 2, the coefficients (or most important movements to the score) are the free walk/stretch trot (ok yay we can do) and then BOTH the canter lengthenings. Ask me if we've ever done a canter lengthening.

I keep reminding myself that we've been working toward this goal for over a year and while it sounds super scary all put together like this, 1) it doesn't even register on the scary scale compared to say, another horrifying go at a jumping show and 2) we actually do have (almost) all the pieces. 15m canter circles are fine. 10m trot circles are fine. Leg yields are fine. It's not like we're going to blow everyone out of the water, but at least we have most of the pieces.
Oh, and I still can't catch C-Rage, but at least he's back to being rideable, so I think that's exciting too? 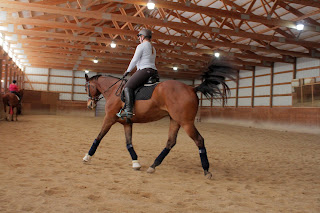