From the Beginning Again

I'm at a rather unique place for me right now--Courage actually feels prepared for what we want to do at shows this year, which is show first level dressage. I mean, yeah, we'd never actually done a lengthen canter (ever) until we went to the show, but we got a 7 on one of them, so hey.

It isn't the movements that are giving us trouble. It's the whole adding-stress-at-a-show problem. I can fix that (hopefully) by going to more shows and actively schooling it, but there are other things too.

As I mentioned Monday, Courage came home and was all bent out of shape about life. 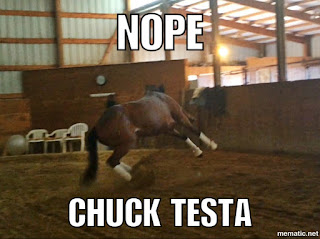 So I let him be. One of my favorite trainers once commented that when a horse (or human) has had a lot of stress build up, sometimes they just need to run. Much like when you're scared because you see a predator, so you run like hell to get away and then feel fine. Makes sense, right?

And as I said, the obstacles now aren't training. I need to find a way to communicate to Courage and move forward, not mindlessly drill movements that we both know he already knows.
So we've changed it up. I know dressage is a very demanding sport and I know that if I push Courage, he'll just burn out. Instead we're spending time together and enjoying each other. 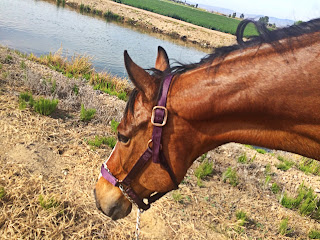 We did spa night and a handwalk down the ditchbank. Courage kept his feet on the ground and his brain in his head and we just relaxed (ish) together.

We had a toodling day. We hung out with the farrier, who called him "a very cool horse" and got a gold star in my book. I got all excited about jumping and dragged my short-flapped brown saddle back out to the barn.
We didn't actually jump anything, but we did have a nice walk/trot/canter hack in the outdoor while a cool storm rolled in. I didn't push Courage or really ask for much of anything. It was a glorified toodle and we both had a good time.

Even when I went back to dressage tack, I didn't go school a bunch of movements. Instead, we walked.
We used the magic contact bit and did simple things. Working walk to free walk to working walk. I played with putting different mini-exercises together to really help him step under and reach forward and after we tried each one, he got to free walk more.

It was great. He stayed relaxed. I stayed engaged. By the end of the ride, Courage was giving me an incredible walk and neither of us was upset.
So I petted his nose and gave him carrots and put him away.

I tend to be a very intense person when it comes to chasing my goals. Courage is a great horse for me because he's constantly challenging me to find new ways to think about problems. He forces me to drop all my baggage at the gate, take a deep breath, and spend the next 90 minutes focused only on one thing. 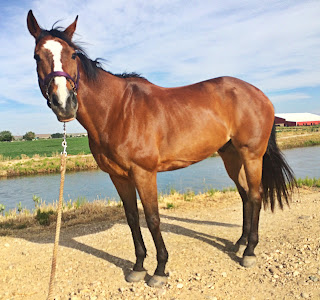 Things outside of horses are a little crazy right now. I'm learning to let Courage be my zen, and for 90 minutes a day, all is well with the world.
Posted by SprinklerBandit at 7:00 AM