I know I was a little spoiled princess/sour grapes yesterday, but I'm human and I needed to allow myself to feel how disappointed I was. Now that we've over it, let's pick ten things that went well in our first level debut.

I'm actually thrilled about this. He had one minorly bad-ish experience last year and then spent 12 months being HORRID about all trailers. Not getting on, running off backwards, and getting progressively worse any time we tried to work on it. 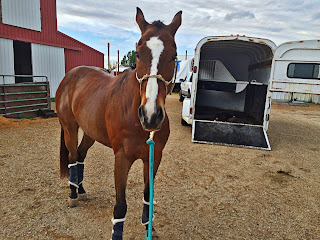 I may be down on myself for not hauling him a bunch of places this winter like I knew I should have, but at least giving him a trailer break seems to have reset that part of his brain. He walked on with zero hesitation both days both ways and unloaded like a gentleman. Gold. Star.

This one is a little harder to explain to people who don't ride C. Last year, Courage would get tense and then he would LEAVE. No ifs/ands/buts. Just gone. It was zero fun to ride through. His method is to invert, suck his neck back so his ears are basically up my nostrils, and then go leaping away. There is no stopping it. 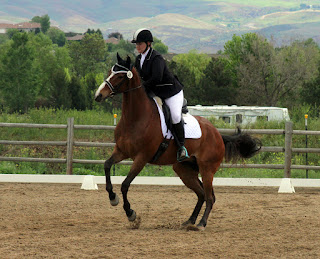 This year, he's been letting us talk him out of it, which is cool, and further, when he did bolt in our first test, he never quiiiiiite left. It was dramatic and tense and icky, yes, but he didn't just abandon ship and go. Last year, it would have been a lot worse.

I could probably do a full post on this and why it's cool to me, but the essence is that he's starting to trust that if he tells me he can't, I believe him, and then he doesn't need to resort to that serious of self-preservation.

I can't take credit for this--Courage is a naturally very square horse. I rode my halts pretty ok and in every single picture, Courage is dead square.
So that's pretty great.

I don't know if y'all remember last summer, but I sure do. It started out TERRIBLE and then I took C to every local show that cost less than $100 and made it my stated goal to ride the horse I had under me instead of tense up and make poor choices.
It worked. I was cognizant through all four of our tests. I made choices about what to do and how to ride. I kept breathing and thinking and moving and asking Courage for what I knew he could give me. Obviously, what he could give me that day was not really what I wanted, but that will come.

You'll notice we had no bolting on day two even though I had a by far tougher ride on a totally peaced-out horse. That is actually a good thing.

I think show clothes are super stupid and I think white breeches are even stupider. I do like my show shirts, so there's that. Regardless, I am generally pleased with how the whole look came together. While seeing myself in whites first thing in the morning nearly caused me to dive back into bed and give up the whole thing, the riding pictures actually don't make me claw my eyes out and want to scream.
I'll even admit that between riding a numbered level (haha sort of) and wearing a coat+white pants and braiding, I feel like we look like legit "dressuers". It doesn't really mean anything or change anything to anyone other than me, but it's a nice little feeling.

Last year we only won first and second place ribbons. 60% of those were due to there only being 2 horses in each of our classes, but 40% were actually legit. While that is a cool set of ribbons to keep around, we're really mixing it up.
Taste the rainbow is our show motto for this year I guess.

When Courage and I first moved to our current barn (with it's 20x40m indoor), my goal was to trot a serpentine in the indoor without completely losing him. It. Took. MONTHS. Not pretty. That was a long time ago now, but building the balance and muscle and training that allows Courage to put in nice half circles has been a very long process.
They didn't even feel challenging in our tests. They were just a great bending exercise that helped set us up for the next thing.

Can I get an amen? 20m circles at B and E never go well for me. It's just so much space and I get all distracted and it's always unequivocally bad (though a stretch circle there seems fine, so whatevs). I really loved the 15 meter canter circles because they provided a gymnastic exercise for my horse within the test rather than just just quizzing me on geometry (hint: not my best subject). 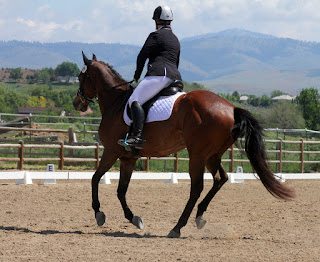 The smaller figure made me keep Courage coming around from my leg and just rode really well. The first level tests may be a lot more complex to learn than training, but I think they're actually a little more horse friendly in that the brain has to stay somewhat engaged.

While I was really, really, really disappointed on Sunday and did not have a good time at all, I actually feel kind of ok looking back at it. I don't feel like dropping back to training level will fix our problems and actually I think continuing on at first level will help. 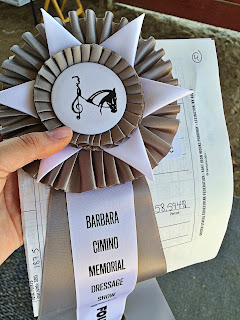 Also even though our scores were not good, they could definitely have been way, way worse. All four rides felt completely terrible and yet we didn't get kicked out and our scores stayed over 55, so eh. Let's get more miles at this level and see what happens.

I'm working on developing adult ammy dressage friends, because this shit is nuts and I need some crazies to console with. One lady who I have a major talent-crush on stopped and talked to me while warming up her (to die for) 4th level+ horse. When I started seriously drooling on her horse, she laughed and told me that two years ago she couldn't even get him in the ring at regionals.
And then I was bummed about my scores and another adult ammy with a lovely horse laughed and told me about how she got scores in the 40s when she first started out.

And so on. I know DQs get a bad rap, but they were super nice to me.

Almost forgot this one so I'm tacking it on at the end.
Can we just have a moment to appreciate how much easier it is to pack for a dressage show than an event?

One saddle. One bridle. One pad. One half pad. One horse.

Instead of two saddles, 3-4 pads, 2 half pads, 2 (at least) bridles, spare bits, boots for two phases, a breastcollar, a martingale and so on. DON'T MISS THAT.
So yeah. You'll notice I didn't even include "now saving $400 by not going to a rated show" as a positive. I actually didn't even think of it in the context of this list til right now. We are officially not entering a rated show this month, which is sad because it was a big goal for so long, but eh well.

Back on the "every cheap show we can get to" plan to log all the miles I can afford. We're not giving up.
Posted by SprinklerBandit at 7:00 AM