Moving Up: So That Happened

So yesterday I mentioned that I botched the warm up (badly) and screwed my horse over, which resulted in  alternately explosive/conservative rides.
I was determined not to do that twice.

My first ride Sunday was at 12.24, so I announced that I would be in the saddle at 11.24. I pulled him out at 11 even and hand walked around the grounds (all of which we'd seen/freaked out about yesterday), lunged him (lightly) in the halter to get him listening and focused on me, and climbed on at about 11.15. Better a little early, right? I can always walk a few more minutes.

I realized I'd forgotten my number (this is a boo boo, but not a big one). I thought I'd just hack my horse over to the trailer that he's walked back and forth from several times now. I like to focus on positives, so I'm going to say that I bailed before the shit really hit the fan. Also I thought to snag a lunge line at the trailer and try that over again.

Earlier this spring, I lunged Courage a lot while we figured some stuff out. We've since pretty much dropped it and generally just don't. Unless it's at a show.

Then we spent an hour running and dolphin leaping and screaming our damn fool heads off, because I don't know, that's so metal. Alyssa showed up sometime around here. She can verify that it is the single worst Courage appearance at a show ever. (Noted: possibly not the worst if you include XC schoolings, but I don't). 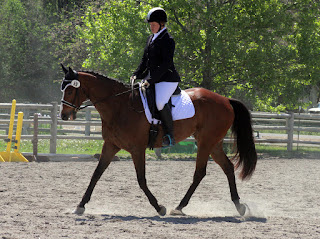 I figured we would scratch our classes and I would make smart choices so as to minimize my chance of death. I kept thinking eventually he'd give it up, but pretty much as soon as he did, another horse would call and he'd lose it all over again. Leaping bucks into the canter while completely distracted? Yeah I'll pass.

I don't really know how long that went on. Long enough that people were like "damn girl, long round pen session", but thankfully no one else needed the lunging area I guess. I eventually got on and C was still mostly a basket case. We walk/trotted around and it TENSE but it was at least less explosive. Sort of. Then they told me I was two rides out and what the hell. Might as well use the classes I paid for.
I kinda planned on just making C get his stupid bay ass into the show ring and down centerline and then retiring after the salute. My trainer (bless her) kindly led us past the horse-eating judges booth and down the scary long side. The judge whistled us to start, and well, it seemed easier to try and do a pattern to get him to focus than try to leave the arena without our trainer leading us.

It was bad. The judge knocked us hard for TENSION and LACK OF SUPPLENESS and I forget. Not being forward? But hey! If we went forward, we were leaving (tried that already), so we just tried to make two calm-ish positive-ish experiences out of what was otherwise a trainwreck.
I guess it sort of worked--I stayed on, we stayed in the arena, and I did ride the prescribed pattern. Sort of. We didn't actually do any lengthenings until the last trot diagonal in first two and even that was more like "allowing working trot" than a lengthening per se. Also the judge was not impressed with our impersonation of a giraffe doing free walk, but we kept all four hooves on the ground.

I liked that we didn't bolt. This is actually big--the horse I had last year would have used any of these components as an excuse, given me a big ol' middle finger, and exited stage left. HARD. We didn't do that this year. Even when he declined to lengthen his trot, it was rideable.

Our scores were as expected--57 and 59. We actually got no 4s and one 7, so I guess that's nice too.
I don't really know how to wrap this up. The show sucked, I drank a lot Sunday night, I'm sorely disappointed, and we're definitely not showing recognized any time in the near future.

The good news is I didn't get launched off my horse and have a shattered wrist and compound fracture in my leg. Nothing like a little perspective, eh?