A Guide the Hot, Emotional Horse

As Austen alluded to last week, Courage (and his more-trained brain-twin, Pig) are not the easiest of creatures to deal with. They're hot. They're emotional. They have opinions about EVERYTHING.

Seriously it's exhausting. I don't know how they do it.

But for real--Courage and I are finally sort of developing a rapport that works for us both.
It starts with the little things--Courage is VERY narrow behind and tends to interfere. This means he gets ridden in leg protection (because thoroughbred), but in order to build his trust and our relationship, I have to pay attention to what works for him. He's very anti-hard-shelled boots. Period. HATE. Cannot move in those.

Even worse than hard-shelled is non-slip lining. He's not a bucker in general (kinda doesn't get how his back end works yet), but these will turn him into a local-quality rodeo bronc.

I can skate by with DSBs some of the time. Polo wraps are better, and the most ideal solution is polos with fancy liners. They provide more protection (yay Aimee!) and they apparently make him not feel constricted (yay Courage brain!) and he's much happier when I accommodate him, so polos+liners it is.
Being mindful of the little things helps sets us up for success with the big things.

Last year, three strides of right lead canter was pretty well our limit. Anything more prompted immediate, out-of-control bolting. There are a lot of "conventional" solutions for a bolting horse and each one of those is worse than the last for Courage. It's not about what makes sense or seems right from a training perspective.
It's about finding ways to communicate with him that build his trust and our relationship instead of tear it down. I have to be 100% intentional and unemotional about every aspect of life with Courage, because trust me when I say he has more than enough emotions for the both of us.

This was tough because it was such a process. Courage is not and never has been a forgiving horse (and he most definitely holds a grudge) and the more I unlock his potential and gain his trust, the more I realize his issues are deep seated and not all caused by me. So basically, I had to unemotionally accept his reactions without responding while he raged against years of strong bits, heavy hands, and pressure.

Not only did I have to learn how to address his emotional reactions to pressure without escalating, I had to repeatedly do so even when it seemed to be failing because Courage had to learn he could 110% trust me to not violate his trust.

And of course, all of this takes an enormous amount of tact and feel and dressage-savvy.

So maybe this is the best time to point out that I'm currently showing at the highest level of dressage I have EVER achieved and I've never ridden past first level and frankly, I have no idea how to train a horse beyond this.
Which means I need a lot of lessons and pro help.

Oh and I did I mention that another HUGE key to success for us is using only Courage-approved trainers?

Most dressage horses seem to be a little bit thicker and more able to take pressure. They get tired eventually and they'll eventually give up if you have to fight with them. Here's some facts about Courage: he doesn't do pressure, he's never been tired in his life, and he'll bring the fight to you.
So it's not that Courage is untrainable, just that he can only be trained by VERY specific trainers and one bad lesson can set us back MONTHS in terms of taking pressure and building trust.

Plain and simple--I won't ride with a trainer unless I have personally sat and watched them ride/teach another horse similar to Courage because it's not worth it to me to fry him again. This is complicated by the fact that very few people think it's worth the time to do dressage on a hot, emotional horse so even if a trainer CAN handle them, I might not get to see it. Oh AND because Courage and I have come so far together this year, he looks more like a horse that can handle pressure which tempts people to apply pressure.

And that is bad. Trust is fragile. Forgiveness is slow.

Slow is how we learn. 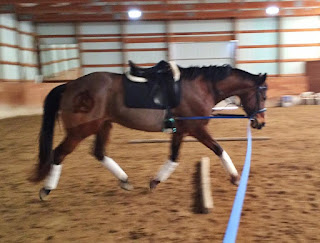 Austen was somewhat joking when she said that we needed to be independent riders, but not really. As the owner/rider of a hot, emotional horse who is attempting to learn dressage, I have to learn to make informed decisions about things I don't even understand every. single. day.

It's hard. It's unrelenting. And it is so, so rewarding.

Here's to the horses that keep the journey interesting.