It's time to review my set of DSB originals or Dressage Sport Boots. I have the navy with white fleece model. They offer sizes small through XL and are widely available online. I've now had these boots a little under a year and it's high time to do a review. 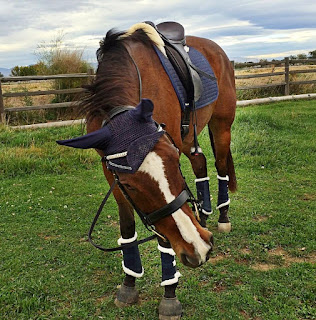 Full disclosure: while I bought these boots because they are pretty, Courage does interfere especially behind. He's a very narrow horse and I know he's going to destroy everything eventually because he puts a lot more wear on boots than a horse who has them only for aesthetics.

These boots feature a faux-sheepskin lining that is easy to rinse out when it's dirty. The exterior is (per the website) "puncture and abrasion resistant heavy-duty vinyl with a strike plate". The elastic is heavy duty and shows no signs of wear even after 10 months of being used 1-2x a week on average. The velcro sticks great. 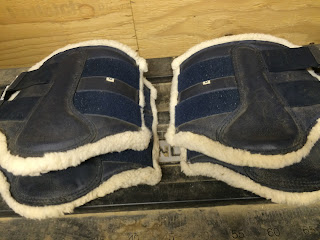 I'm really picky about elastic straps on boots--I hate when it's too stretchy because then it can be overtightened and I hate when there's no give because then it's hard to get the fit right. These boots strikes a nice balance--the elastic gives a little but hasn't worn out and is in great shape.

Courage has really average horse-sized legs. Like most really average horses, he goes in a medium boot in front and a large boot behind. I bought these without having the opportunity to try them on, but it was totally fine. The edges of the boots meet with no gaping or overlap and the elastic is the correct length to close the boots securely without overlaping. The boots fit his medium-bone legs perfectly and I have no complaints. 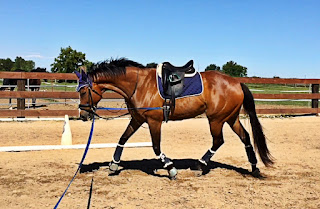 I boot up my horse so that when he does interfere, the wear is taken out on the boot and not on his skin. Thus, these boots do have wear. I'm ok with that. Courage primarily interferes low on his hind legs. As such, that's where the wear is on these boots--the strike plate is still in good shape, the fleece is plenty poofy and not dead or gross looking, and the elastic and velcro are holding up great. 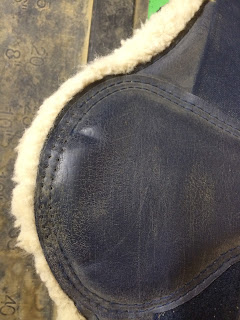 The exterior stitching where Courage interferes is starting to rub out. The boots are still holding together fine and I fully expect to get another year or two out of them without further maintenance. In fact, if I were to have them restitched, it's possible they'd last even longer. (Now that I think about it, this seems like a pretty good idea.)

I purchased my Dressage Sport Boots through Riding Warehouse in the early fall of 2015. They're listed at $42/pair with a discount for buying two or more pairs. I'm pretty sure I also had a coupon code when I ordered, so my total for a full set of four attractive navy boots was a little under $80.

As I mentioned, I've already had and used these boots for nearly a year and I expect to have them a good deal longer. To me, this is an excellent value for boots. They're still more expensive than polos, to be sure, but they are dramatically easier to use and wash (hint: hose and hang dry. Ivory soap if you're picky). I have had zero trouble with Courage reacting to the boots and he can be VERY picky.  I have even recommended these boots to friends, which is something I'm pretty careful about.

I'd be hard pressed to come up with something I don't like about these boots--they're pretty classy looking. Let's face it: basically all fleece lined boots in any price bracket looks the same, so not much sense in paying $275+ for Mattes sheepskin boots when these will do the job. If I have to nit pick, I'd say I don't like to ride through the stickers and weeds in these boots because the fleece can pick up seeds and stickers, but that's sort of a universal fleece thing and that's why we have non-fleece boots for riding in weeds sooooooo. 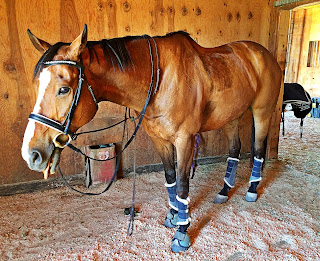 In general, my only objection to these boots is that I prefer how polos look. That's not a negative about the boots, simply a comment on my personal preferences and amount of free time.

If you need a good all-purpose boots that offers superior protection and can be used and abused without guilt and still look great, this is the boot  for you. Easy to use, easy to clean, easy to store, easy to find. 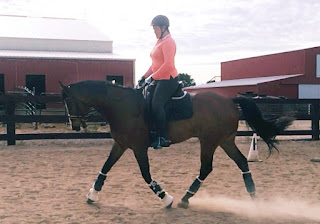