Courage is not a horse that can be drilled. Repetition makes him tense, not correct. Seriously. I can halt him 2-3x per ride, but more than that and he starts offering anything he can possibly think of--backwards, sideways, whatever--because halting is hard and icky I guess. (I can stop and toodle any time I want. This is specific to a connected, square halt that he has to work out of.)

This year, he actually takes pressure exponentially better than last year. I mean, last week we did dressage THREE RIDES IN A ROW and he was shockingly ok with it. Now we didn't do the same exercises those days, but he showed up with his brain turned on and it was great.

That means I need to mix it up to reward him. And it was a holiday weekend. And Monica did this cool uber-patriotic photoshoot with her boys (again). And hello, have you ever wondered how hard it is to carry a flag on a hot, reactive OTTB*?
Courage is a funny horse--he always takes care of #1 (him) and he isn't fearful but he is careful. He's not a spook particularly. I unrolled the flag and didn't get any pictures immediately because I was laughing so hard. He went all big eyed and silly, but got over himself pretty quickly and never really tried to leave.
Then he was just curious. We played around posing with the flag outside the arena, because a barn buddy was riding and I actually wasn't trying to get her bucked off (even if that's what happened later, whoops).
Once he got over the initial shock of the flag flapping in the wind, Courage was his usual engaged and curious self with a fabulous helping of posing dramatically.
It was significantly cooler than it has been and the wind was blowing, the farm fields around the barn were being worked, the manure guy was hauling stuff away and all the horses were a little on edge from fireworks noise lately. Oh, and Courage was about 80% ok with the flag touching him everywhere but about 20% HOLY SHITBALLS NOT OK and I decided that I didn't actually want to die.

So I stayed on the ground. However, the problem with horse girls is that one we hatch a crazy plan, we all want to go through with it. Awesome barn buddy played with the flag next and... yeah I've redacted her horse's identity. Let's just say that she is a brave and kickass rider but sometimes the ground gets you anyways.
And also, everyone should have that one friend you can text early in the morning and be like OMG DO YOU HAVE A FLAG BRING IT TO THE BARN because not only will she bring it, but her and her barely-5-tiny-AQHA will show everybody up and get amazing pictures. 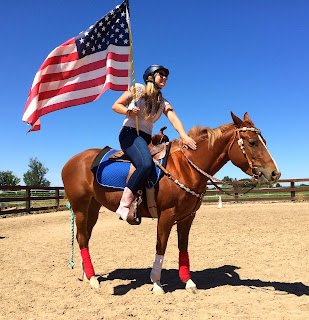 And that's the story of how I let Courage decompress after a hard training week. Oh and also I'm possibly already plotting a gameday photoshoot for football season with a flag. I'll keep you posted.

*As for how hard it is to carry a flag, the answer is much respect to Monica. Either her horses are flipping amazing or she's batshit crazy or both.
Posted by SprinklerBandit at 7:00 AM