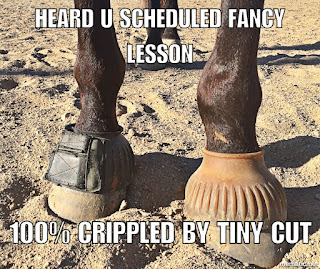 I sort of think I could just drop this meme here and it would cover all my feelings about the past few weeks.

Two weeks ago, we couldn't work because Courage's toes were long and he was kinda on and off.

One week ago, he decided that stretchy trot was too hard and we couldn't work because we couldn't brain.

Oh and then last week, he wrapped up his bell boot-destroying-rampage by NEARLY SEVERING HIS LEG getting a probably-self-inflicted tiny cut and being COMPLETELY CRIPPLED.

Yeah no strikethrough on that one because it's actually true.
It's a long ways from his heart. It's not serious or scary or even really anything. If he was anything other than a giant princess thoroughbred, it wouldn't be swollen and he wouldn't notice it.
But noooooooo he is most definitely a princess and so I am (not actually a joke) tack walking, cold hosing, and buting him for a TINY CUT that BARELY broke the skin.
You might say I'm massively overreacting and I 110% agree with you. IT'S A TINY CUT.

But. I discovered it Thursday morning when homeboy could barely touch his foot to the ground to hobble around because OMG CRIPPLED.

Gave him two days off with bute+cold hosing and he was still off at the trot. Did a couple more days tack walking but no bute or hosing and yeah, you guessed it, he blew the leg back up like a balloon.
So yeah. I'd scheduled some lessons for this week and was hoping we could finally start moving forward again. 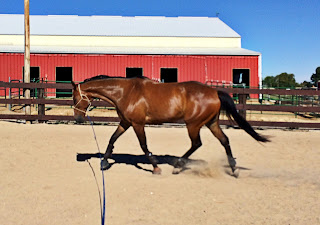 which of you bitches ruined my plan by telling him?
Posted by SprinklerBandit at 7:00 AM