Turning It Off and On Again

It never fails. I write a sappy post about how Courage is going so well and things are MAGICAL and then everything falls apart.

No seriously. Those amazing stretchy figure eights? Courage lost the ability to turn right AND left and decided that his only option was to flail sideways if I tried to put leg on.

So I tried riding inside to take steering out of the equation (yay tiny indoor!!) and uh yeah basically I just held the martingale strap for dear life while we flailed around and this was AFTER a toodling day that SHOULD have reset someone's bay thoroughbred brain but obviously didn't.

Then I got all up in my head and frustrated and decided I was a horrible person and probably a failure and a quitter and that I flat couldn't ride. Or train. Or anything. Ever. 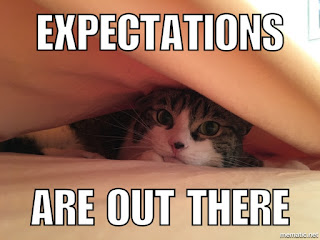 But see, I used to work in the horse industry and it was amazing how many amateur horses came into the barn in this exact state. It was also amazing how quickly the horses came back when you just looped the rein, gave them a kick, and promised them you wouldn't pull at the same time.

So that's what we did.
Big fat friendly bit. Loop in the rein. RIGHT REIN MEANS GO RIGHT and give as soon as he did. I didn't care where his head was, where his balance was or if he was falling in or out or anything. And then we went left with the exact same principles. I stayed neutral as long as he went forward on a circle. No picking. No fidgeting.

My thighs want to murder me for two pointing at the canter until Courage decided we could both turn and relax, but they'll get over it.

Now, don't get me wrong--this isn't a ride Courage was ready for until this summer. As a racehorse, he was always pretty packaged under saddle and so throwing the reins at him and kicking was terrifying for everyone and a recipe for disaster. He didn't understand his body in space and he wasn't great at self regulating. He needed a lot of miles to learn how to go like a normal horse.
He's there now. He understands how to go forward without free falling. That's huge. He also is doing REALLY REALLY well at some legitimately hard stuff I'm asking him for, but some days he (and I) need to remember to just go forward and relax and make things easy. It's not enough to walk around and spook at birds anymore.

We need to make the whole process easy so when I ask for the canter in a dressage ride, he's in a good mental place to deal with it and doesn't just think canter=sit=work=hard=PANIC. 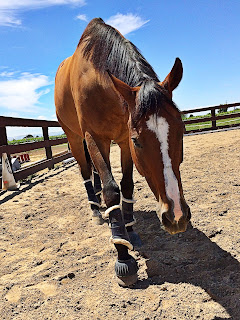 It's a process, to be sure. I swear every day with this horse is a guessing game in which I only get about a quarter of the useful information. But hey. All I can do is sit here and think about tomorrow cuz ain't no way my legs work well enough to get up. Jump stirrups are short, yo.
Posted by SprinklerBandit at 7:00 AM