Because I am a responsible adult, I instantly used "SB got her job back" as an excuse to buy Courage a set of Euro-inspired knock-off dressage boots.
I haven't used them at all because SOMEONE was CRIPPLED and I was pouting. Plus they're white and summer is gross and dusty with glaring light that makes photography both miserable and impossible. Plus having a job means I have to go to it sometimes which cramps my style occasionally (not actually complaining omg I love having a job).

Anyways. If you obsessively stalk all the cool instagrams (cough while unemployed of course), you've probably seen more expensive models of these boots floating around. I naturally wanted the Schockemohle dressage boots, but there was the slight issue of them costing roughly a billion dollars (aka $175 a set before shipping). That's kind of a lot for a horse who frequently decides he can't actually wear boots. 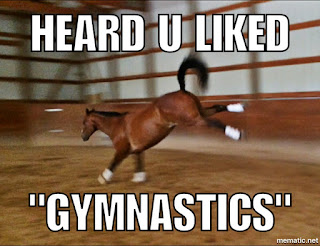 There's a slightly cheaper Eskadron version (and I do love Eskadron) but at $85 for fronts and $95 for hinds, I take it back they're actually not cheaper.

Horze also makes their "Laval" boot which costs $95 for a set of four and offers free shipping at that price point, but I have a slight problem with my mailman delivering a box with horze on it. I don't have much pride, but I just haven't crossed that bridge yet. 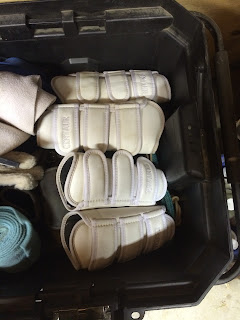 So anyways. I landed with a good old fashioned American knock-off job, aka the Centaur Classic Dressage Boots for like $68 shipped for a set of 4. When I told my friends I'd ordered them, I kept getting the same question:

"Do you think Courage will actually wear those?"

Uhhhhhhh maybe?
Posted by SprinklerBandit at 7:00 AM