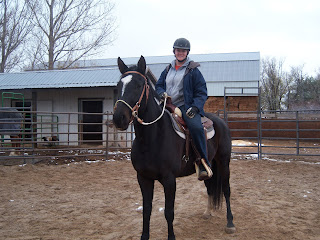 One of the ladies at the new barn used to be a western trainer, specializing in pleasure and reining. I've been teasing about Izzy under western tack, and she took me up on it. So adorable!

We started out with another bareback/bitless ride in the indoor, in which we primarily worked on mounting. Izzy does NOT like that part, I think because it's so different from what she's used to. She was getting a little better (and I was getting better at not surprising her), so we rode around the indoor.

That's when Terry came in and I mentioned how adorable Izzy looked with her western sidepull on. She said she had a saddle that would probably fit her, and off we tramped to the other barn to find it. It fit quite well, I think. I don't know a lot about fitting western saddles, but Terry said it looked good and Izzy did not object. We are going to try a different pad next time, though. 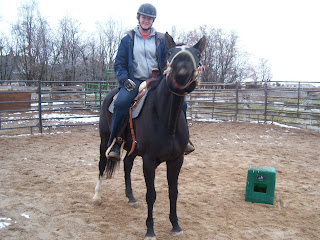 Izzy celebrates the lack of a 'real' bridle.

I just rode around the round pen both directions and did w/t/c. Haha, maybe I mean walk/jog/lope. ;-) I laughed pretty much the entire time because it all felt so weird and Izzy knew I didn't have much control so she pretty much just went where she wanted to. 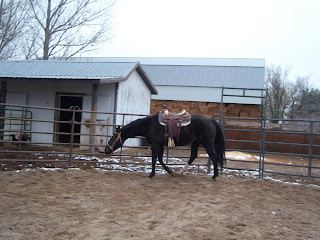 Here's Izzy when we first put it on her. I was letting her wander the round pen with it on and she just looked goofy.

We should have more western adventures coming up--the footing in the indoor is not conducive to serious dressage work and I want to keep Izzy moving. Plus, Terry offered to give us lessons. How fun would that be!!

I've always been a teensy bit embarrassed that I live in Idaho (you know, serious cow country) and I don't even know how to put a western saddle on. I guess that's another thing Terry needs to teach me. ;-) I now how this silly urge to go check out western tack and other exciting goodies online, though Terry assures me she has all I've ever need (and her tackroom definitely backs up that statement).

Still, I am in dire need of new paddock boots. Perhaps I'll get a western version this time around. Next thing you know, we'll be doing... um... something western.

Actually, I have a dressage lesson this afternoon.
Posted by SprinklerBandit at 8:43 AM