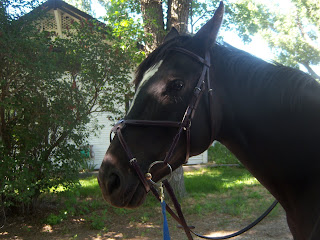 A picture of the lovely pony mare. I haven't had this bridle long enough to review it, but honestly, it's shaping up to be my favorite ever. It just suits Izzy's face. Plus, the reins aren't too long. Win win.
Yesterday was jump day, so in keeping with my monthly goals of jumping more and doing gymnastic-type exercises, I set a ground pole, then 9' to a vertical (no crossrails here!!), and then 9' to another vertical.
We did a quick warmup, then cantered in. It was not pretty. Izzy knew she had to do something, so she sort of scrambled and chipped and leaped, more or less in the same motion. It's a good thing she's so honest, because if she'd put on the brakes, I don't think I would have stayed with her. Ha.
We tried again with much the same result, except she also took the vertical down. Hm... I dismounted and reset the jump, then stared at the ground rail. I didn't want to move it any further out, but it didn't seem to need to come in, either. It looked right, but it wasn't helping. Hm... New plan. I remounted and trotted in to the jump. About a stride out from the ground rail, Izzy went, "Oh, I got this." Canter, stride, jump, stride. No rushing, no head flinging, no tripping.
Perfect! We jumped it a couple more times the other way, and when we could canter in and just flow over the whole combo, I called it good.
Ok, now I will give you the promised tour of Izzy's new digs (same barn, new pasture). 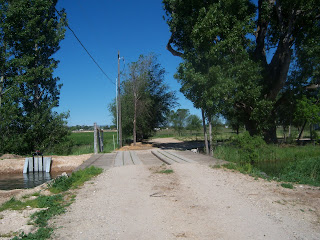 To get there, we start by going over the scary bridge. It's going to be so good for her to do this twice a day, every day.
You can see between the boards to the canal below. Also, there are no walls. I think only one horse has fallen off of it in the entire history of the barn, but Izzy is determined to not be the second. 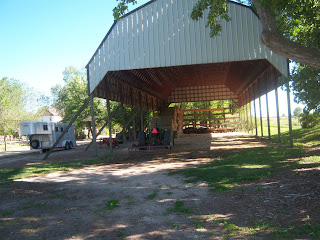 Next, we go past the hay barn. It's pretty empty right now, but the first cutting of the field is scheduled for next week, so it should start filling up quickly. 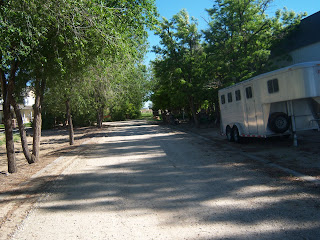 Then down the shady lane. 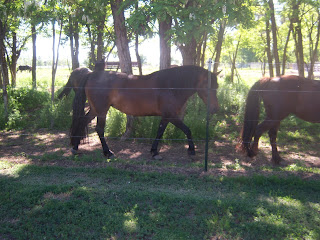 Past the friendly Morgans. (So cute...) 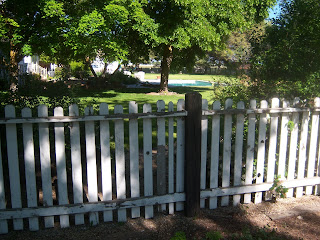 By the owner's back yard with the delicious looking swimming pool. 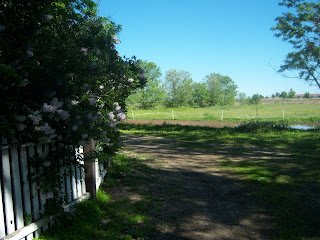 Around the corner arrayed in lilac bushes and to the right is Izzy's new home. It's not as big as her last pasture, but it's lush and stud-free. There are certain drawbacks.
As you can see in the picture, when they irrigate, it gets very, very wet. Fortunately, it's hot enough now that even extreme wetness dries out quickly.
Also, since it's a smaller field, she has to stay in the dry lot during irrigation so she won't mess up the corrugation. I understand and am not thrilled, but all in all, it's going to work for us, at least for now. 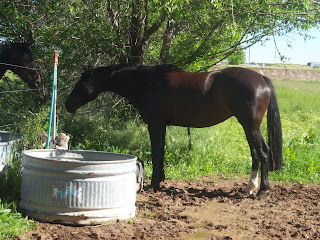 She even has a nice mare friend over the fence.
Good times are had by all. (Except the stupid studdy gelding #1, who apparently spent the entire night bellowing for her. The BO, who lives on site, was not terribly amused.)
Posted by SprinklerBandit at 9:07 AM