Who is the bravest and bestest and cleanest jumping pony in the world? 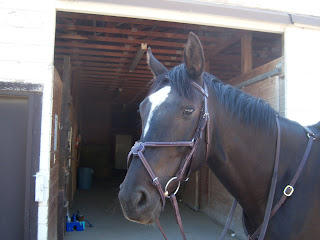 IZZY!!!
We had one last jump school this morning to prepare for the exciting and upcoming lesson. (Yes Frizz, I am currently hunting down a photographer.)
As I set up the jumps, I just felt nervous and upset. "Why am I doing this? It terrifies me. I could just do dressage and trail ride."
Somehow, that didn't sound nearly as satisfying as I thought it would. Intellectually at least, I like jumping.
I started Izzy out lunging over the modified barrels again. We quickly ran through the progression--crossrail, vertical, oxer, oxer with barrel, just barrels. She did ok--one almost stop at the barrels, but then she went for it.
Ok. No excuses. Time to ride.
We did a quick warmup of my favorite jumped variety. Forward, back, forward, halt, move off both legs and we're set. First things first: I wanted to establish forward, pace, and balance. 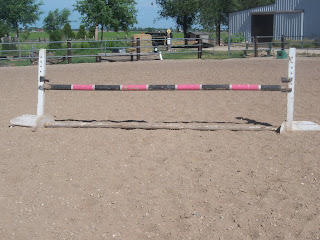 We started with this simple vertical (the gymnastic component: I set it on the diagonal). We cantered in and focused on establishing a rhythm, then halting after the fence. As Jimmy would say, "You want them to land thinking, 'now what?' instead of 'watch this!'"
We're still getting in sync with each other, really. We had a couple of really nice jumps, but we're trying to strike a compromise between too backed off (my comfort zone) and too forward (her comfort zone). It will come.
Finally, we made a jump we were both comfortable with, did a circle, and aimed at... 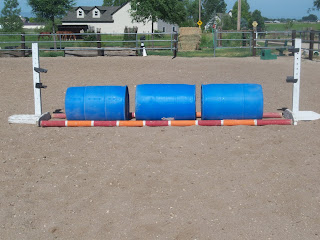 THE HUGELY MASSIVE AND SOLID BARREL JUMP!!!!!
Ok, it's like 2' tall and the barrels are plastic, so they move if you hit them. Still, intimidating.
Rest assured friends: I was wearing my fullseat breeches.
There are two schools of thought on jumping scary jumps. One says to trot in and let the horse have a look. The other says canter in, strongly forward, horse will learn to be brave.
Since Izzy is smart and learning and I'm not particularly brave, we chose school #1. We trotted in. Izzy hopped over and I grabbed mane, than patted and praised and told her what a wonderful pony she was.
We turned around to go over it the other way. We trotted in, and about 3 strides out, Izzy started veering right. I kept my hands steady, put my right leg on, and halted her straight in front of the jump. We stood for a second, I patted her, then we turned left to circle back and try again. Same.
Hm... obviously, I'm the problem here. What's missing?
Impulsion.
Duh.
This time, we circled back and on the approach I focused on staying centered over Izzy while keeping her forward (riding back to front... like dressage...). We trotted in and bam, jumped it.
YEAH!!! We did it a couple more times and even made a loop from the barrels to the vertical, which went ok. Izzy actually offered to canter in the last few times.
After assuring her of her general awesomeness, I decided we were done. 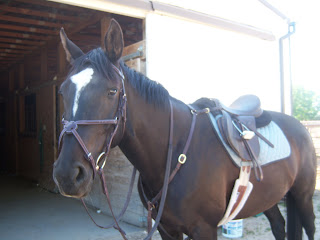 All that's left to do is wash her white leg and tail... and clean all my jump tack... and do some dressage tomorrow.
So exciting!
Posted by SprinklerBandit at 12:17 PM