Izzy and I crossed water, unassisted, for the first time ever this week. Yes, it was just a measly irrigation ditch that was about 2' wide and 2" deep, but by golly, we got over it and neither of us had a total meltdown. This is a big deal because previously, she always had to be lead into water and then would pretty much jump on top of the person doing the leading. Also I would have a mini freak out in my head because I would be afraid she would do something crazy... like jump in...

For the record, she did take a couple of massive flying leaps over the water and I was in dressage tack, but hey, we survived and we're both better for it.

It was supposed to be track day yesterday, but the weather was atrocious. Since we were stuck in the indoor and I was tired, I just set a single caveletti and rode Izzy back and forth over it. We focused on staying straight, going forward to it, and halting after it, instead of a mad dash away. 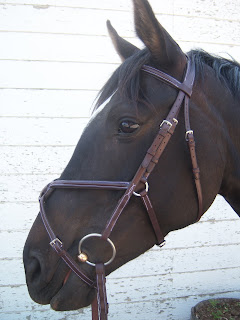 Then, something exciting happened. Our Five Star Tack bridle came. I was so tempted to take a second trip out to the barn to try it on Izzy in the dark...

I resisted, but barely.

Here we are, trying it on today. I hadn't made all the final adjustments yet, but I think it looks amazing on Izzy's pretty face. Yes, it's hook stud ends, but they're so finished and neat looking. 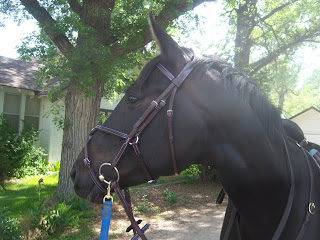 Here she is, posing for us. Pretty, pretty mare. 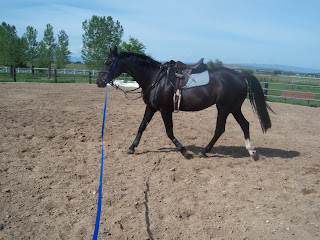 And the requisite lunging picture. She is looking great. I barely got to ride today, though. Izzy and the horrid gelding were getting introduced to a new pasture mate.

It's another studdy gelding... yay... I was so hoping for the spayed mare instead. Anyways. The owner said she'd come out at noon, but then came at like 10, which abridged any and all work I wanted to do. 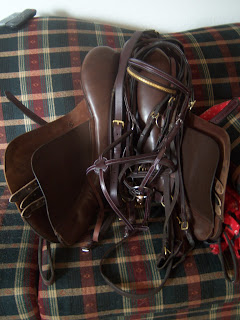 Whatever. The introduction ensued with much drama, but when it more or less settled down (I still think the studdy geldings are going to fight it out, but w/e Izzy is smart enough to stay out of it), I hauled this load home.

It is now disassembled, wiped down, soaped, rinsed, conditioned, rubbed off, and re assembled. Plus I did a ton of loads of laundry. You can say it. We're both amazing.
Posted by SprinklerBandit at 8:29 PM