Voice Inside My Head

In light of the fact that Izzy hasn't seen an XC jump since May last year, I thought I should try to approximate one for us to practice over on our jump day. Thankfully, I live in the land of cow horses and barrel racers, so 35 gallon drums are easy to find. I set two of them lengthwise on the ground, and then put a ground rail on either side to keep them in place. Basically, it's about the size of a 2'3"ish oxer. 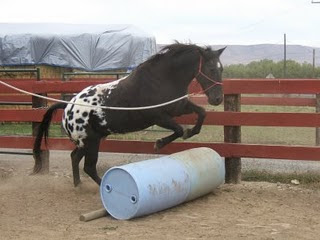 (Not my horse or arena, but the best approximation google images could come up with for the obstacle I created.)
Since Izzy and I had issues with barrels last year and I am not the world's best and most confident rider, I decided to lunge her over the jump a couple of times before I tried to ride it. I let her warm up, then guided her in at a relaxed trot. She slammed on the brakes right in front of the barrels. I clucked, and she leaped over them. She galloped away, almost looking proud of herself. "Ok," I thought, "a couple more times to smooth it out and we're good to go."
Ha.
Izzy came around again. This time she slammed on the brakes a stride out and when I clucked to her, spun and galloped the other way. Grrr. Bad pony. I got her sorted out, and tried again. This was worse--about 20 feet out she halted, then without waiting, spun and galloped the other direction.
I wanted to kill her. Idiot pony.
Before I made another move, I heard Jimmy Wofford's voice ringing in my head, "She's not educated to the jump."
I grumbled back, "how can I make it any easier? It's barely two feet tall. Besides, she just needs to run around and settle and then we'll be fine."
Jimmy-in-my-head didn't argue as I watched her gallop madly in circles around me. "Obviously, I have her too fit," I told my internal Jimmy. "You always did say that this was a risk with lower level horses."
Internal Jimmy said nothing, but as I watched Izzy continue her mad gallop with sweat flying off her and lather building up, I realized my strategy of wearing her down while glaring at her was probably not going to work. Dammit, Jimmy was right.
I started asking Izzy for transitions. At first, it took a whole circle to get a downward transition, but gradually, she improved and seemed to calm down a little. "Ok Jimmy, how do I make this any easier?"
Nothing... but I did remember him talking about teaching a green horse to jump a liverpool at one of his clinics. Hm. Ground poles. I stood the outside barrel on it's rim, laid the inside one on it's side, and set two ground poles between them. I left my lunge whip on the ground, kept Izzy on a small circle, and had her trot over it both ways, several times. Ok. Cross rail. I used the barrels as standards and set a little x. Again, she trotted it both ways. Vertical comes next. This time, she cantered, but it stayed nice and relaxed.
Next logical step--oxer. Make the rails as wide as a barrel would be. She cantered in and jumped just fine. At this point, she's so wet with sweat that I don't even really want to touch her, so I'm trying to limit jumping efforts. Now, get the third barrel and put it under the oxer. This is our proving ground.
She didn't even bat an eye. Canter, canter, jump, and away we go. Calmly. Happily. Sweatily.
Here goes nothing... I laid all three barrels side by side, put the ground rails in place to keep them there, and sent her in.
Canter, canter, jump, canter. Good girl!!!
Internal Jimmy didn't even have to say anything. He knew he was right all along. 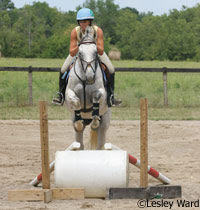 Another google images gem. Now that we've conquered the barrels, I want to try this.
Posted by SprinklerBandit at 8:57 AM