Officially, Izzy and I are not jumping until September, because pretty obviously, I have SERIOUS position/leg issues to deal with.

Unofficially, Izzy is bored out of her mind doing dressage right now and I need time in (out of?) the jump saddle to solidify my lower leg. Soooo...

Yesterday, I set a trot pole and a cavaletti. The cavaletti was only like 12" tall, so I figured we'd be fine. She usually jumps it on her first go, then just lazily trots over it after that. 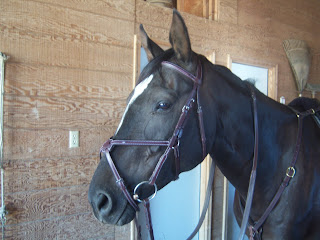 Not this fearless, brave pony mare. SHE WILL JUMP, thank you very much.

She looks lazy in this picture, but don't let her fool you. The dragon is resting...

We had a grueling warmup, in which all she had to do was stay forward while my bum never touched the saddle. Ok, so maybe not at all grueling for her, but I wanted to die. I figured we would finish up with the set obstacles. We went back and forth over the trot pole, with me practicing keeping her straight, keeping my position, and moving in rhythm with her.

Then we turned for the teensy tiny little 1' cavaletti. We were trotting in, until about three strides out when she just charged at it and took a MASSIVE FLYING LEAP!!! WHEEEEE! JUMP!!

I brought her to a calm, collected halt, then trotted off again.

She remained enthusiastic. I settled for keeping a balanced canter to the itty bitty rail that was BARELY off of the ground, and then halting sometime after it. Apparently, she was getting a wee tich bored of the whole dressage pony thing. 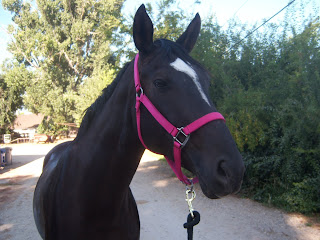 Could a dressage pony rock this halter? Get real.

Today, we were back to stirrupless dressage again. My legs are getting to be downright amazing, y'all. Also they hurt a lot. Anywho. My plan is to continue riding stirrup free to help develop a nice, long leg and a better seat. However, since I can't ride her as forward as I would like without stirrups, periodically I will put them on and see how much can stick when we add in forward.

Yes, I realize that the best of both worlds would simply be to ride that forward without stirrups. If I was amazing at riding the sitting trot, I would consider it. I am not, and as such, I only ask for as much trot as I can sit without functioning as a jackhammer on her back. 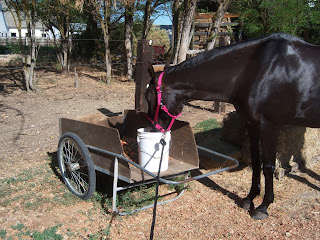 What makes everything better for Izzy is that the apple tree has started producing. The BO raked up the fallen apples and leaves them in a cart on the way back to her field.

Lastly, here's a shot of Izzy munching a few extra apples in her grain bucket. 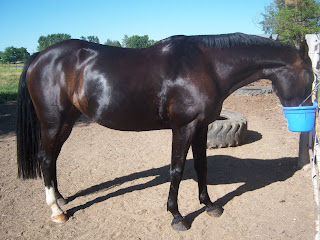 Maybe she looks just a wee tiny bit less fat than before?
Posted by SprinklerBandit at 2:01 PM