The Good, The Bad, and the Ugly: Show Recap!

First off: I apologize for the complete and utter lack of pictures. It was indoors and at night, so you can imagine why there was absolutely zero point in even trying.

1) Izzy unloaded like a pro and came out pretty calm. She looked around and walked around with me, but had no major issues with anything, including heavy equipment buzzing around, two herds of donkeys braying, and ponies galloping by willy nilly.

2) I achieved all my goals for the show. I was calm and relaxed (mostly), I remembered my course, and I had a great time.

3) I stayed balanced on kept Izzy between myself and the ground. Win!

1) When we went into the show arena, Izzy reverted into total brain melt mode. The sensory input was so much that we stopped at every single jump.

2) Most of them more than once.

3) Some we never even got over.

1) Stephanie got on at that point. Izzy decided she'd had enough for one day, and tried to park at the first jump.

2) Stephanie backed her up about three steps and made her jump from there.

3) The rest of the course was in kind--Izzy said no, and Steph made her go. I have never been happier to watch someone ride my horse than I was then.

They ended up going in for a second round, which was much smoother and better to watch.

Overall, I'd say it was a good experience. I felt incredibly comfortable on Izzy--I expected to get on and feel precariously perched again, but no. I was riding. I was in balance. I felt fine. Even with all the stopping and awkward leapings that was our attempt at a course, I felt ok. I stayed in the middle and didn't get off balance or flustered. I expected to be tossed out of the tack at every fence, and I wasn't. 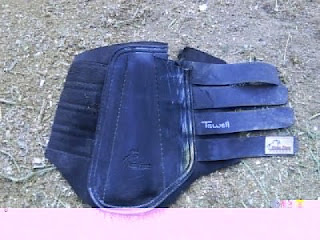 Also, for those of you who wonder why I boot Izzy perennially, here it is.

Green and freaking out mare at show ripped a massive chuck of her boots. It tore through the strikepad, neoprene, fabric, everything, but there isn't a mark on her leg. If she'd left a hunk of leg on the fence, I'd have a vet bill (most likely) and and a horse who didn't want to jump because the jumps will eat her.

Don't forget to VOTE FOR ZYMON AND STEPHANIE!!!
Posted by SprinklerBandit at 1:48 PM