Izzy and I had an interesting jump lesson yesterday--Stephanie set three jumps on a curve in the end of the arena. They were just group poles to start with. She gave me this speech about finding the middle of the horse and getting her in front of my leg, all while fiddling ominously with a lunge line.

Then she clipped the lunge line on the bridle, had me drop the reins, and we started jumping.

It was pretty fun. I didn't have to worry about steering although I did have to give the occasional kick since Izzy is aware of the limits of a dressage whip held by someone with a lunge line. Stephanie had me focus on solidifying my leg position and finding my balance on Izzy. I had to have excellent eye and body control. 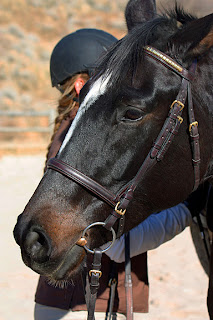 Izzy being who she is, things did not exactly go according to plan.

Ms. Mare got bored of the endless circling and going forward, so she refused the ground pole.

Then she jumped the standard (which was tipped over to facilitate lunging, but still about 2'6"ish from a halt).

Unfortunately, I had tipped forward when she stopped at the pole, and nearly catapulted off at the subsequent leap. My heels went flying over my head, but I caught her neck and the girth was tight, so I managed to sit back up when she halted. Whew. Close one.

We stayed with tiny little jumps--part of the reason Izzy is not super forward has to do with a hind-end funk that was going to be worked on later in the day.

At the end of the lesson, I felt more balanced and confident than I have in a while. I'm finally starting to learn the mechanics of what is supposed to happen when I point Izzy at a fence, and that makes things so much easier.

As for the repairing section of this post, well, Izzy had an encounter with a chiropractor yesterday afternoon. She's had minimal bodywork done before, and always been extremely reactive, to the point of being dangerous (see here and here, for the last few times we tried). We took it to the next level--instead of using the local lady, who can't even touch her anymore, we used to expensive, out-of-state guy.

He is kind of crazy.

As I lead Izzy out of her stall and up to him and his assistant, I hear them muttering "Oh, she doesn't look good" "mumble mumble" "Yeah, really sore on her right front". All I can thing is, "huh?" Her left front is her crappy foot (that is improving), so I might expect a little there, but right? Weird.

He proceeded to work away on her. As before, she was really, really reactive when he tried to touch her chest and her withers at the same time (this connects some fort of accupressure point that Izzy cannot stand). Her withers were a complete mess-he probably spent almost half of his time just fiddling with that. Then he moved down her spine--mid back (like where the saddle goes) was completely fine, but lower back was a hot mess.

Apparently, it is now a sufficiently fixed hot mess. He explained (after much prying from me) that there were some things that were very wrong with her back and they'd probably been that way a long time, based on how she reacted. That caused her to overcompensate with her front end, which caused the mess in her withers and neck.

She got today off with some turnout, but I'm hoping to be back in the (very cold) saddle tomorrow. I'm excited to see what kind of changes we're looking at.
Posted by SprinklerBandit at 2:44 PM