The lesson went down this morning.
The pictures went up last night (I KNOW!!! OMG!!!)
So, despite the fact that it is currently blowing wind and snow and overcast, I give you happy, sunny pictures of the lovely (but cold) day we had yesterday. 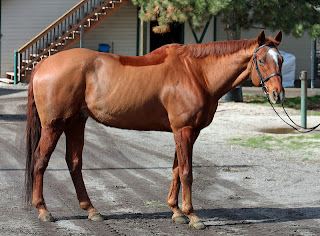 Glamour/conformation shot of Cuna. He's about a mile long and has zero hind end angulation. That said, he has a big butt, a nice shoulder, a heart of gold, and an adorable face.
These conformational traits come into play under saddle. He's hard to put together, likes to stick his little nose out like a pony, and has a neck like a giraffe. He's also remarkably balanced and mobile for a big, old horse, despite being completely inflexible. 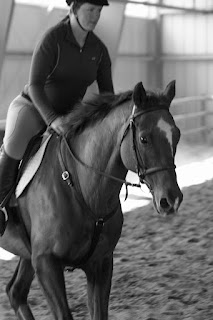 Just pretend there is snow blowing into the indoor, and you'll basically be picturing the scene of my lesson today. We started off in a completely logical manner for one of Stephanie's lessons. She walked into the arena, and said, "Ok, ten minutes of trot, starting now. Do the first five in two point."
The perils of riding with a lesson buddy who is on a fitness kick... (some idiot with my initials may have mentioned to Stephanie later in the day that she needed to work without stirrups. Kick that person.)
So we did five minutes of circles and serpentines in two point, then got a minute or two of posting trot, then started another five minute set of two point. The math-y side of me wants to point out that this is clearly more than 10 minutes, but since Cuna and I both need fitness work, I didn't say anything.
On to the easy part! There were two verticals set at 45 degree angles to each other. 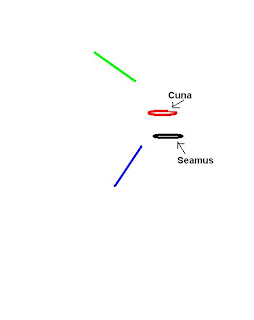 First we did them on the long turns, L lead to blue and R lead to green. We had to be able to count when we were 5 strides out from each jump. I was consistently between 3 and 6, so I guess that's good, lol.
Then we had to do the verticals off the short angles--R to the green and L to the blue. Also while counting. It is weird to be on the rail, not pointed at the jump, and know you're five out. TURNING!!!
We were doing this over cross rails, then 2'3"ish verticals, then Steph jacked them up like two holes. I had a brief moment of heart failure, but once I was on course, I didn't have time to think about the height. I had to get Cuna balanced and straight and there and he worried about the jumps and it was wonderful.
Then we had to connect the two. That's right. Three stride bending line between two massively large verticals. (Ok, there were 2'9". Looks big to me.) 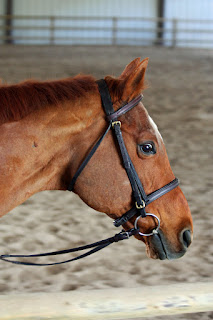 Cuna's all "Omg rider insane. Will save ass as per usual".
The first time was not pretty. I got crooked to the first jump, rode poorly between the two, and somehow overcompensated myself into a worse second jump. Seriously. I have no idea how it's possible to screw up that much in that short of a distance. Cuna saved me like the saint he is, and we regrouped.
This time we were just as bad. I got him to the second jump so that he was nearly parallel to it. He jumped it because he is awesome, but that makes a 2'9" vertical ride like a 3' xc table, which is really not the right idea. At all.
Stephanie gave me some pointers about being "perpendicular to the face" and "opening my inside rein" and "putting my leg on" (who ever heard of these things?) and we tried again.
Success!! Two most excellent jumps on a line that is as bent as a non-bending horse gets. Of course, I was so focused on not screwing up fence two that I sort of forgot about riding after it and we were pretty close to the rail. Cuna went left. I pulled right, he nearly spun around, and I nearly flew off. Thanks to many minutes of two point and keeping my weight in my feet, I managed to find the middle and not take a header into the fence. Whew. 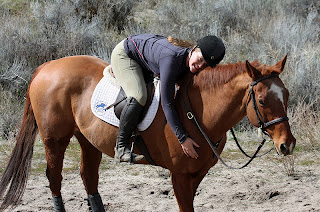 We definitely ended on a good note. (Picture from previous day of sunshine and happiness).
Cuna hadn't really broken a sweat. I was barely hanging on and I had two more horses to ride.
I'm still ambulatory, so that's good news.
All photos of awesomeness taken by the estimable Ellie of Cedes of Change. Tacky jump diagram by me.
Posted by SprinklerBandit at 1:52 PM