Sunny with a Chance of Jumping 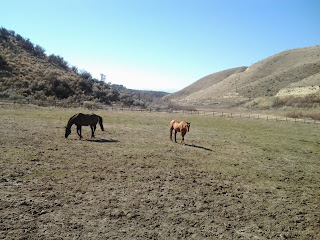 So sunny!! Laddie (the black one) and Cuna (the cute one) are out in the pasture with no blankets for the first time this year. They were quite happy.
Mr. Cuna and I had a jump lesson today. We worked on cantering over poles at first. We had to develop a rhythm, ride it around the corner, and make a set number of strides between the poles. The advantage to Cuna being like a 2"x4" is that he doesn't bulge out his shoulder. The disadvantage is that he isn't terribly adjustable.
Well, at least not yet for me. We'll get there.
Next we transferred that skill to cantering a line of tiny crossrails with four strides in between. It was a short four, so I had to be willing and able to take a hold of Cuna and MAKE HIM WAIT. He's a big-strided big dude, so three was just easier for him. Plus that pandered to my insecurities--I always had to kick Izzy forward and grab mane and pray that I wouldn't die, so settling to a fence is bizarre to me. Good, but bizarre.
When the jumps went up from tiny crossrails to a 2'6" vertical and a 2' swedish oxer, I was really on the spot. I would ride to the jump, then think we were too deep, lose my mind, and all of a sudden be a stride away from the second jump. Poor Cuna. He is such a good boy--he just kept doing his job and letting me sort myself out. He never stopped and he never ran out. What I really need to do is just jump low stuff like this over and over and over again. I have jumping PTSD basically and I don't really have good habits to fall back on, so when I get scared, I don't know what's happening.
The good news is that Cuna lets me figure it out without being naughty. The only thing he doesn't like is if I'm quick with my upper body, which I'm not. Yay! We have a bit of a speed problem after the last fence in a line, but nothing out of control. 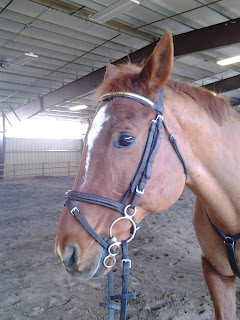 The bestest old man in the world. This picture isn't from today, but he just looks so adorable. I'll ride him tomorrow and work on braking and turning.
Then Saturday we are entered in a little local show. I have no idea how that's going to go, but it should be fun. I can't promise pictures--all my equestrian photographer friends seem to be out of town and I'm saving my bonus points with regular photographers for shows that are not indoors over mediocre jumps.
That's the good news.
After Saturday, Cuna is going home for a while so Izzy can come back to the barn to be sold. My plan is for her to be in and out in a week. Who wants to buy my horse so they can keep reading about the adorable OTTB gelding instead?
Posted by SprinklerBandit at 2:26 PM