When I first moved Courage to the new barn, the other boarders were blown away by how quiet Courage was and the fact that from his first ride in the indoor on, I've been hacking around on the buckle.

Which is why I thought it was really suspicious that Mr Calm and Cool was all of a sudden losing his marbles and spooking at all kinds of random things. ALERT ALERT ALERT ARENA DOOR AHEAD sort of nonsense.

I recognize that it's winter and the cold weather+sometimes limited turnout can cause some behavior changes, but that didn't really feel right. There was something else going on.

See, this past fall Courage started being a total dick to ride. Every minute of every ride was me fighting with him about stupid stuff. And then S rode him and was all "IGNORE HIS BULLSHIT COMPLETELY" and you know what, it completely went away.

So what happens when my usually non-spooky horse leaps dramatically away from the in-gate of the indoor arena?

Well, I look for what scared him, which means I take a little leg off and let him drop impulsion and maybe give up the contact and...

Ding ding ding!! We have a winner. 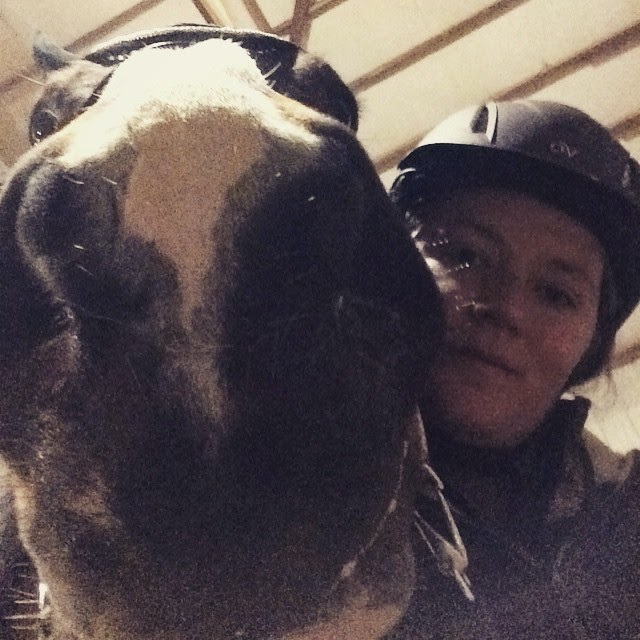 It was so obvious when I put it in those terms. I had just been talking to a friend of mine and remarking how sweet he's been and wondering where his jackass/smart/evasive side was. Yeah, right there on the surface. Where it always is.

With that in mind, I put Courage on the bit and made him do ring figures. If he had time to invert and look up, his brain wasn't working hard enough. If he spooked, I kept leg on and rode forward. If he told me he wanted to spook, I pushed the reins at him and rode forward to keep from bracing.

And yeah, guess who completely gave it up and gave me a lovely ride?

In fairness, after I hopped off, he had a massive spook in place. Because you know, cold weather+limited turnout really is a thing. It's just not as big of a thing as he wanted me to think it was.

He's such a bastard. It's why I love him.
Posted by SprinklerBandit at 7:00 AM