Standard Deviation of a Courage

Those of you who are stats nerds (it's a surprisingly huge number--I was a B stats student, so I don't quite make the cut) know what a standard deviation is.

Those of you who are B stats students (or less) like me might need a little reminding. 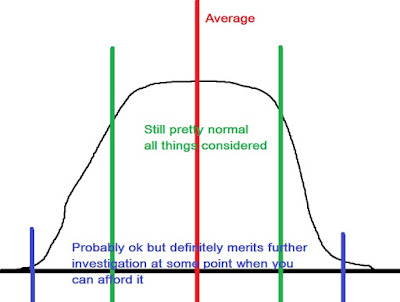 The above is (sort of) a bell curve, if bell curves were drawn freehand in ms paint. Like this one. It's pretty self-explanatory, but it goes like this. The red line is the average on the curve. In this case we're talking about the behavior of Courage on any given day, so it's just an average day.

Most days are going to fall in between the green lines--that's one standard deviation. And those things are all pretty ok for Courage in general.

The blue lines are where things get concerning--that's two standard deviations and you'll notice the incidence drops a lot. It's still not mission-critical MAYBE (or maybe it is), but something is definitely up.

Anything past the blue lines is RED FLASHING LIGHT URGENT DROP EVERYTHING AND CALL THE VET/call trainer to sell horse.

This curve is very specific to an individual horse. I swear some horses are a freaking flat line. (There's one at my barn. Cool horse. Odd.)

As we all know by now, Courage is a complicated, sensitive horse who not only wears his emotions on his sleeve, but also has OPINIONZ about EVERYTHING. The math I do every day is simple--do those opinions fall within a standard deviation of a Courage? If yes, proceed. If no, think it through.

That's how we got body work and teeth done--the OPINIONZ had escalated outside the blue lines and were rapidly accelerating into the green ones.

There's more to it though--the Courage I had last year actually had this inside one standard deviation. 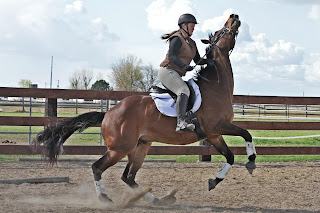 Yeah don't miss that at all.

The horse I have this year has deescalated to this:
It's not pretty, it's not all that fun. It is less dangerous and a little easier to explain as "normal" behavior, because even the non-horseiest of people tend to know that the horse's head shouldn't actually be over yours.

But not only is the horse a moving target--so are my tolerances. This whole equation only works if his standard deviation fits into what I can deal with. So to some people, the first fail picture is "whatevs NBD" and to others, it's "OMFG NO SELL IT NOW". I fall into the category of "I rode it enough times that I know I can, but I'd rather not".

The second one is pretty hard to be upset about. Yes, Courage didn't want to play in a lesson. Yes, he was a pissy pants and hard to deal with. But meh. Instead of saying "CANT WONT HATE YOU ALL NOT TURNING RIGHT EFF YOU BAI" he's like "screw you i don't want to connect my hind end and soften".

I mean, it's still not a great attitude, but it's hella easier to work with than a full fledged flail. (You're welcome.)

Frankly, when I compare the two shots, which were taken at roughly the same time of year almost exactly 12 months apart, I get a little excited. Look! Things are changing! Maybe someday they'll be good!
And then there's this. Yeah, it's a cherry picked screenshot and the video is nooooooot even sort of amazing, but the good moments are getting better, the bad moments are not as bad, and I feel like I've kicked the whole bell curve a few feet to the right and improved everyone's scores.

And that's the world as I see it. You see how I didn't even use any numbers to talk about math? It's like how I talk about dressage and never say "outside rein". #magic
Posted by SprinklerBandit at 7:00 AM