No one was around today when I got Izzy out, so I really took my time with her. I gave her a thorough grooming and wrapped her legs with her special climatex bandages. It's not so much that I want the protection and support (?) as it is that I wanted all her legs to look the same so the white one didn't throw me off at all when I looked at them.

Next I put her in the round pen to trot around both directions. Honestly, she looks pretty good. Her stride looks really even--it's just that ever so slight head bob that the optimist in me wants to say is just part of how she moves. (The optimist isn't always right, unfortunately.) I decided that walking her around under saddle wouldn't hurt anything at least, so we went back to the trailer and tacked up, then headed out to the arena for the first time.

I've been riding in the round pen because the footing is softer, but it's also uneven and obviously, we do a lot of turning. Today I planned to just do some easy walk work mostly on straight lines. Izzy was great. We haven't had a lesson in ages, but I think I'm developing a feel for what she's doing so we're better able to work together. We di some leg yields and straight lines and even eventually a little trot. Here's the interesting part: Izzy is more than willing to stretch down. At the trot, she's even forward into the contact and she doesn't feel off at all.

Weird, huh? I'm hoping to have Cathy look at her Monday.

We have a trim and new shoes scheduled for this week as well as a chiro visit. I have no idea if she'll be ready to go to the show with us, but I realized that it really doesn't matter to me. As long as it's her pretty face greeting me at the barn, I guess I'm ok with just hanging out and doing this forever. 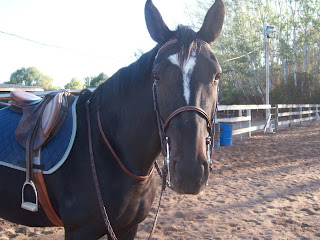 Posted by SprinklerBandit at 1:49 PM