This is going to sound overly angsty and it is.

And I'm not apologizing for that today.

Yesterday was clinic time. I had the day planned down to the minute, including an hour+ of wiggle room for "unforeseen adventures while hauling". I've been stressing about this clinic for two weeks, but once it was a concrete thing and not just on an amorphous horizon, I felt really good. I was excited. I was ready. 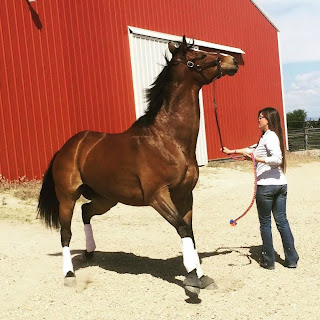 And Courage wouldn't get on the trailer for love or money. I thought I'd been embarrassed by a horse in every possible way--I mean, even if he bucked me off and took himself on a tour of the dressage barn with AK watched, well, it wouldn't be the first time that had happened to me in public.

We used every bit of my hour of wiggle time. We used more. I had to call the host and tell her we weren't coming because Courage would.not. get. on. the damn trailer.

Yeah, my horse who's loaded and hauled across the western states his entire life? The one I can take places by myself because he's so easy?

It was not his day.

About halfway through what would have been my clinic time, we had him standing quietly on the trailer with the back door open. We didn't even try to close it. He was completely lathered. (And when I say "we", I mean Alyssa did most of it because she was least emotionally invested and very good at groundwork.)

He's not an easy horse and why he picked yesterday to make a difficult day, I'll never know. He probably doesn't know. I know we put the horse first. That's why it turned into trailer loading day instead of "just jam him in, slam the door, and go day".

I'm angry and disappointed and confused.

To be perfectly honest, I'm not sure why I'm doing this.

I'm seriously considering selling him and buying some sort of ranch broke thing that gets on trailers and turns right reliably. It isn't rocket science.

Horses are supposed to be fun for me, but he's been a challenge every step of the way. Thoroughbreds are notorious for how hard they work for you, but he... doesn't? I don't know.

Is this even worth it? Tell me we're going to turn a corner or send me ads for my damned ranch horse. (NO MARES).

PS The only positive lesson I can take out of this is that maybe we aren't meant to do dressage. Mounted shooting, here we come?

Posted by SprinklerBandit at 7:09 AM