Probably because my equine "homeworld" (if you will) is eventer/jumperland, I'm generally pretty aware of what a fried jumper looks like. I've watched people create them and I've helped/watched people trying to fix them.

Let me tell you: it's hella better to just not fry them in the first place. Re-training is a nasty little bitch.

Anyways. While I'm aware it's totally possible to fry dressage horses (and let me tell you, when that shit happens it's BAD NEWS BEARS), I've never really thought about it as a thing that I would do. I mean, I barely even know how to dressage. How could I possibly "fry" a horse in a sport I do badly? 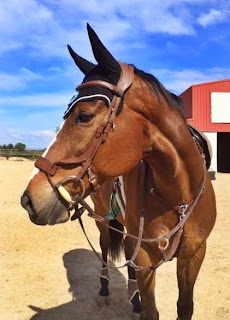 Answer: so, so easily.

Here's the thing. Courage is 10. He spent a good 6 years racing. He's been off the track less than two years. He's arrogant because he's used to being good at what he does. You don't race for 6 years by sucking.

So when I introduce him to a whole new sport (putting-head-down-and-using-butt), it's hard. And yeah, maybe he has a lot of potential, but he doesn't see the potential. He just sees that every day he does hard things WRONG and it SUCKS BALLS.

Of course, compounding all this is me getting excited and trying to overachieve my way to an accelerated training plan. Dressage day every day! What could possibly go wrong?

Well, I could start to fry my horse.

He's too much like me. He likes being right. He likes being good at stuff. If you tell him he's wrong constantly, he's going to shut down and quit trying, especially if he has any physical excuse (no matter how minor).

That's where we're at. I don't think we've done any lasting damage, but I'm trying to be very conscious about how much I'm asking Courage to do.

He likes jumping and he's good at it, so we need to jump 1-2x a week. We limit dressage session times and go hacks in the fields. We take days off. We mix it up, keep it fun, and find things we enjoy doing together.

And yeah, when we make our big debut at intro in two weeks, hopefully we won't completely suck.
Posted by SprinklerBandit at 7:00 AM