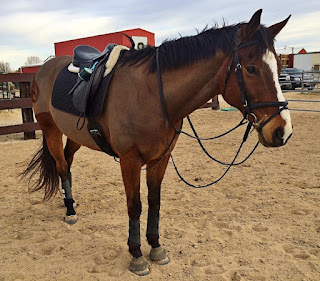 As y'all are aware, Courage is a very talented individual who can be challenging under saddle. He's bored by constant repetition and needs things spiced up from time to time. In light of that, my trainer recommended introducing some FEI level stuff on the driving lines. Obviously, he's still a first-ish level horse and all, but she thought we should switch things up to keep his brain engaged and prepare him for the upper levels.

I asked if introducing this stuff on the ground would prompt unwelcome things under saddle, she said, "Don't worry. Everyone falls off sometimes."

So here's a breakdown of our FEI moves: 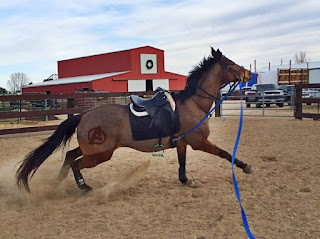 You'll notice the symmetry in his hocks shows his very-level balance at this moment.This is the beginning phase. The angulation in his forelegs can be more extravagant the farther out behind him we can get those hocks. 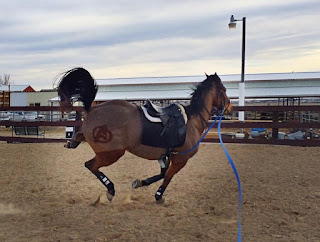 This is a controversial move from the Cadre' Noir (the French school of lightness above all else) known as the "Elevacion' de' derriere". When performed under saddle, it is important that the rider lean back at this critical moment to create that all important "V" between the horse's neck and the rider's torso. The German say this should be done in a driving seat, but the French say that unnecessarily rushes the movement. You'll have to find what's right for your horse. 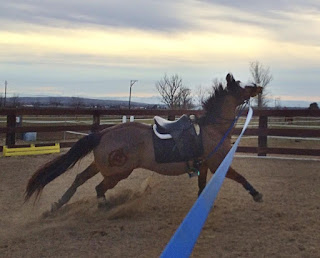 Whether or not you hold with the school of lightness, all the masters agree this is the correct finishing move. The head twist angle here is critical--it mirrors the dynamic tension in the spine. If the head was too straight, the stride would be too long, which would weaken the movement. This should never be ridden as a standalone movement. It is ALWAYS the transition from the Elevacion' to, well, let me show you. 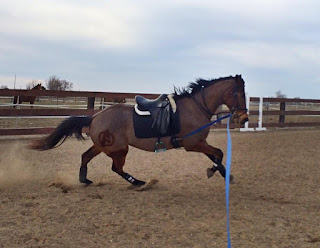 This move is very similar to the extended gallop. The emphasis is really on loading the hind end to maximize the exuberance with which the horse uses the front end. It is very important to keep the horse's head contained at this point. A failure to do so frequently entails resuming the lesson in a completely different county than the one you started in. If your instructor has a travel fee, that adds up quickly. 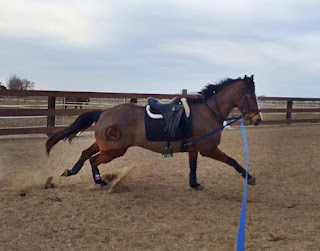 This is basically just another shot of the same "Sehr Schnell Rennen", but in another phase of the stride. As Courage progresses, we'd like to see less forward motion and more elevation of the stride.

But hey. We're just getting started at this level and I'm pleased with his progress. What do you think?!

Footnotes--these phrases are from the original German and really weren't mean to be translated in to the english language. We just don't have the nuance to REALLY express what they mean, but this is roughly them in case your strange foreign brain wants to sort of grasp what's happening.

1) Run and flail
2) Run like hell
Again, there's just something about the Dreschflegel that doesn't come through in the English.