Here's a thing about Courage: he hates brushing. 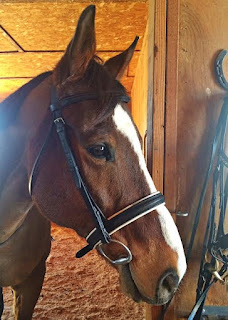 So when Amanda was like "omg new brushes so amazing" I was like "lulz bitchez" and moved on. But then I was getting all weird and sappy about Courage and Amanda was like "I swear it's real" and I got poking around Teddy's Tack Trunk website.

I wanted one brush to try out.

But a brush is like $20 and shipping is like $6 and there's a coupon code available on the site that offers 10% off orders $50 and over. And free shipping if your order is over $60.

So I carefully perused the softest and most picky-horse-approved brushes, piled 3 of them into my cart, added a tail brush, then got my 10% off (which made the tail brush free) and free shipping (which made my tack ho heart happy). It was Friday at like 1pm. I hemmed and hawed and screwed around and finally hit order around 3pm Mountain Time. On Friday.

The brushes were on my doorstep when I came home from work Monday afternoon.

Really people. You have got to try that.

But of course, outstanding customer service was only part one of this order. Part two: would Courage let the brushes anywhere near his precious princess self?

He's old enough to know better than to try to kick me, usually. He still lifts his hind legs (I won't smack him if the leg is on the other side of his body from me), grinds his teeth, savagely attacks the wall, twitches, and generally attacks abused. Before you call me a monster, keep in mind that he gets "groomed" with one semi-approved plastic curry to get the worst of the mud off (and is blanketed to prvent major mud) plus one specially-purchased soft brush that skims off the dust. The whole "routine" took under 60 seconds, and his reactions are actually less extreme than they used to be.

After knocking off the mud, I busted out our new brushes. First we used the Prinze natural body brush. The very-unassuming website description says this "Horse grooming brush, medium bristle texture, made of 100% pure horse hair and a lifted double edge of natural bristles. Lacquered beech wood body and durable leather strap."

That doesn't seem like much. It's pretty much the nicer version of the brush I already had, right?
WRONG.

The bristles are super soft and giving, with just enough resistance to really lift the dirt out of the coat. (Courage is body clipped--obviously these brushes cannot actually reach through intense winter yak hair). What's more magical, this brush did all that with far less actual pressure on the brush than my cheaper brush with longer bristles took.

Which meant that Courage stood there and kind of flicked his ears like "I should hate this but I don't quite".
Then I pulled out the goat hair brush. The website description is this:
Extremely soft and luxurious horse grooming brush made of long and thick, 100% pure goat hair with beech wood handle and a durable leather strap.

Let me tell you, they are DEAD SERIOUS about the luxurious thing. This brush is possibly softer than my sheepskin grooming mitt. It's amazing. I started using it to lift the traces of dust left behind on Courage's coat and OMG YOU GUYS. 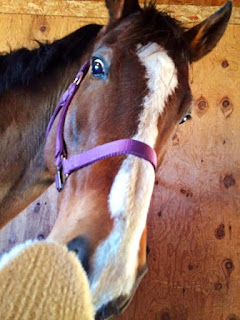 He couldn't believe it either.

Seriously. For the first time in the years I have been with this horse, he just stood there and let me brush him. He dropped his poll below his withers. His body relaxed. Of course, when I stopped to take a picture, he twisted around like WTF WAS THAT and I got the above picture instead.
I also got the goat hair face brush because I don't know, it seemed like a good idea at the time. It's the same as the big brush, but easier to use on faces. It seemed rather extravagant, but it got me free shipping.

It gave me the same bizarre experience as the goat hair body brush. Courage got tense when I got near his face, but then... nothing... he didn't quite relax into it yet, but instead giraffing it up and trying to get away, he just stood there. THAT'S HUGE. Seriously.

The goat brush was so soft and magical that I'm pretty sure angels were singing and I just kept using it and his coat started glowing. 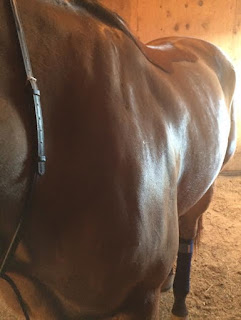 I mean. The reason we get by with so little grooming in general is that this horse has fantastic nutrition and good coat genetics, but like. Omg. There is a whole 'nother level of shine that we're unlocking right now.

I got Courage out and worked him, then let him much hay in his stall and (get this!!) (omg!!) groomed him again while he was eating. HE WAS EATING LOOSE AND I WAS BRUSHING HIM.

That has never happened before. Usually if I even try, he leaves the stall.

Color. Me. Impressed. These brushes are phenomenal, the customer service is amazing, and wow. You have to try this stuff. And Teddy's Tack Trunk didn't even give me a kick back for saying that. (I am the worst at free shit. Otoh, all my opinions are completely my own.)

PS Those discounts were valid as of when I ordered. Looks like the current threshold is $75.
Posted by SprinklerBandit at 7:00 AM