Part of our not-so-subtle transition from "I swear we'll jump something someday" to just straight dressage queens was prompted by a dressage clinic in which the instructor kept asking me if Courage was jumping a lot. He wasn't and I told her that. But. When I asked for clarification, she said that until he really learned to draw his hocks under him as a default instead of going inverted, jumping was just going to exacerbate the problems we were dealing with. 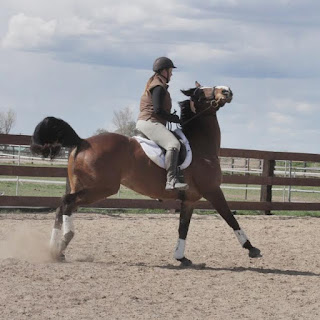 That makes sense to me--I'm working to counteract the effect of six years of racing on a naturally tight horse. Whenever he feels pressure, he defaults to the rigid, inverted frame he used to run away with people, which creates body soreness and a vicious cycle of tension.

So we totally stopped jumping. We were going in to winter anyways and I hate setting jumps inside. A few months back, I tried lunging him over poles and it was a total train wreck. He's never been the best at them (championship aside) and he was spinning and spooking and leaping and running inverted and all kinds of things that weren't helpful.

But the other day, he was acting wild while we tacked up (ugh means leaping day) so I figured I might as well give him something to leap over and see how it went. Best case scenario, he'd look slightly less crazy because he was leaping things that actually existed. Worst case, well, that would involve getting fried and prancy and bad things and let's not think about it, but I'm getting more confident in my ability to read him. If it went poorly, I could just pull the poles out and pretend they never existed. 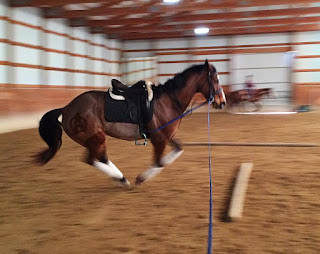 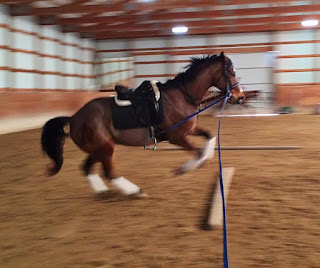 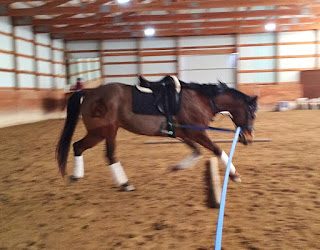 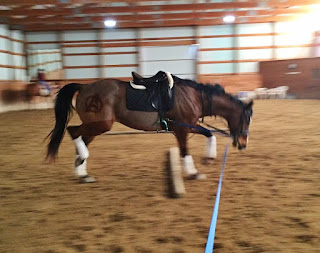 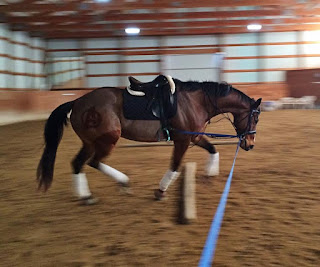 I mean, these are all obviously varying degrees of fails and trust me when I say he was wild enough that I had to hold on to the line with both hands for the worst of the fails or you'd have video and they'd be even funnier.

He's not just leaping and flailing and checking out. He's staying engaged with me and trying different ways of going over the poles.

That makes me excited.

It's not even really about the pole. It's about his willingness to trust me and try new things, especially things that have historically been very hard for him. Mentally and physically leaving is his default and after almost a year and a half of solid work, we have we made strides in changing that.
This is a new chapter for us.

PS there are a few more days to submit your entry to our fail contest!!
Posted by SprinklerBandit at 7:00 AM