My trainer legitimately likes my horse, which is a little weird considering what he's done to her. 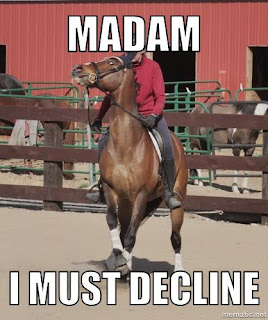 She seen him pretty well at his worst in terms of not wanting to cooperate, not handling pressure, not trusting people, and not being easy to deal with. He's one of those horses that gives you every reason in the world to dislike him.

I mean, the day he moved in, she basically had to transform the run on his stall into an electrified elephant pen because he both fought over the fence with his friends AND chewed their tails off under it. Then he decided to be uncatchable in turnout. While doing that, he actually got grounded from group turnout TWICE on account of trying to kill people when they came to catch his buddies (and the tail eating thing). He bites. He gets weird injuries. He sometimes decides not to participate in questionable practices like "getting on the trailer" or "standing in the wash rack". He can't be ridden during beginner lessons.

He's flunked out of multiple trainers' programs because he is simply not an easy horse. I think the general sentiment was "dude just get something EASIER this isn't worth it".
But she still likes him.

And I'm realizing just how important that is.

When he's at his worst, she's at her best. She's kind and patient and did I mention patient? She's not pushing him to do anything on a schedule. She just accepts the horse we have any given day and quietly talks to him on whatever level he can handle. A lot of trainers can "deal with him", but very few see what we work through and still think he's worth the time and effort. And by very few, I think she's one of two three and the other one has a vested interest in our success.

And to me, this makes all the difference in the world. I can't help myself. I like the little guy. I feel like he's worth taking my time on. I feel like we were brought together for a reason. The more we build trust in each other, the more I realize what a cool horse he's really capable of being. 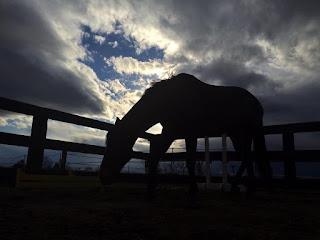 Getting here has been a long and involved process. It's one thing for me to say "yeah he's difficult, but I like him" to someone who believes in both of us.

It's a whole different thing to say it to someone who thinks I'm wasting my time. They see the challenges. They see the time and money and effort and heartbreak I've sunk into a horse that doesn't always look like he's going to give anything back. They make the rational analysis that I'd be better served by another horse who required less and gave more.
If that's the person I'm looking to for counsel when I'm at my lowest and I'm struggling with how much I put in to a horse to still not be able to do basic things, then of course they're going to tell me to try something else.

And that's why it's so important to me to ride with people who not only believe in me as a rider, but people who genuinely like and understand my horse. With a horse like Courage, that SEVERELY limits the number of people I can train with. I hope that eventually, he'll be more rideable and we'll have more options.
In the mean time, I'm just so glad that Courage has finally met someone just as patient as he is FABULOUS.
Posted by SprinklerBandit at 7:00 AM