A Touch of Whimsy

We had a jump lesson on Saturday, which was crazy hard--I rode a two stride bending line and was perpendicular to both obstacles. Eek! Then dressage/hack on Sunday...

So obviously we didn't want to work too hard today. Hurrah hacking time!! I talked a western riding friend into going out with us on her midget horse. That's the key--there's one trail I'd never followed because you have to dismount and get through a Montana gate. That is way too much work on a giant horse, but a handy chica with a shrimpy pony? Perfect!

Because Cuna is a superstar, he was totally chill about the whole thing while the midget mare jigged along. She had a massive spook and he didn't even flick an ear. What a guy. 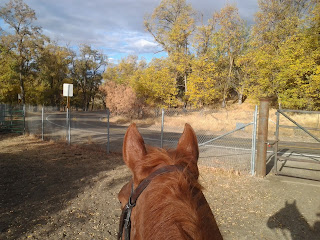 The trail dead end-ed(?) into a paved road and locked gate eventually, so we turned around. This whole time, I've been missing out on a flat, sandy arena with a gradual incline that I could have been galloping on. #fail


We watched the cars go by and decided to explore a fun trail that went up the hill.

At this point, the midget mare was still prancing, so we went up the steepest part to calm her little brain down. She jigged about three more steps and went, "Oh." And that was that. She's old enough to know better. 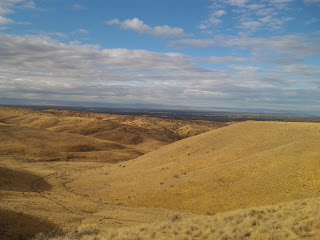 We got to the top and I had to take a picture. It was gorgeous.

You might also notice the picture is a little lopsided. That's because as I snapped the shot, Cuna spotted ZOMGZZ LOOSE HORSES RUN FOR THE HILLZ!!!!!!

Yes. One ridgeline away, there were some loose horses grazing. They barely even looked at us.

Clearly, this was a cause for PANIC. We pranced! We jigged! We snorted! We went down the hill an easier way, and out the trail we came in on. I did not recover Cuna's brain until we made it to the barn.

And then, covered in foam, he's all, "Yeah, totes won that race, bitches."