Oh boy! This is seriously the best part of blogging. I go through the year's blog posts, cherry pick my favorite pictures and posts for the month, and share snippets here. It's a great way to get a sense of how Courage and I are progressing and omg yay pony pictures! 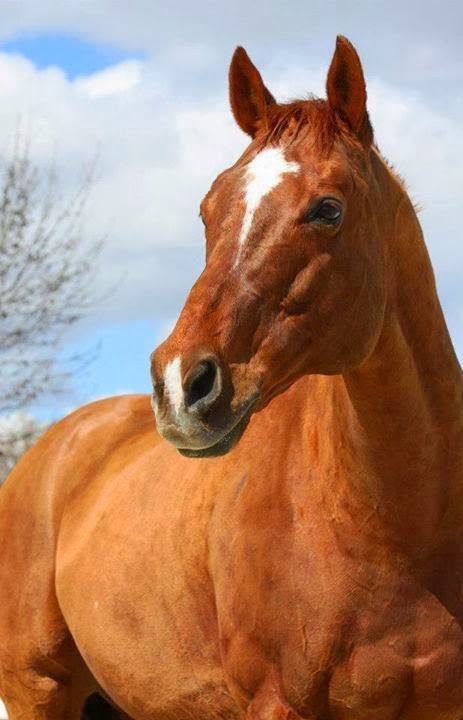 This was a terrible month. The weather was terrible, Courage was on break, and I had to make the decision to put down my mean ass bastard horse.

Ellie (who took this gorgeous picture) wrote the post to let the blog world know because I couldn't find the words.

When I finally put the words together, all I could summon was gratitude for all that Cuna had done for me.

The second month of the year from me reeling from losing Cuna and from really great (sarcasm) personal situations. I compensated by stress-buying nearly everything on the internet. Courage snagged a saddle, browband, breastcollar, custom pad, and various accouterments.

The weather was still terrible and there wasn't a lot of riding to be done. I occasionally walked around on Courage, and when the arena cleared up a little, I started doing some lunging.

I also had a lot of fun dressing Courage up like a Budweiser Clydesdale, because why not?

I still can't explain why I thought this was a really good idea, but it was tons of fun and we got great pictures and I'd do it again in a heartbeat.

March had moment of brilliance and moments of not-brilliance. Courage came back into real work and he was feeling very, very good. He leaped and flailed his way through an attempted lesson, although his home jumping efforts were respectable.

Despite looking like a hot mess, Courage started to address placing poles, obstacles higher than 18", and some different looking stuff. It was more for my brain than his, but we both needed it.

Our flatwork continued to progress as well. Ellie got some nice shots of us, but she had to pick them out from lots of wild flailing. When this shot was taken, we had to cut the ride short because SOMEONE flailed so hard he nearly went through the fence and did bite his own tongue.

April saw Courage and I take our first out of state trip together. Aside from a little interlude about ditches, it went very well.

I was impressed with how well Courage handled the whole thing and blogged about the entire experience.

Even at home, Courage was jumping really well. We addressed lil' jumps with some fill. Courage was going forward on a loose rein and I was riding very well.

We were very excited for the upcoming show season, at least until my car exploded.

This was a serious roller coaster of a month. The weather was gorgeous. My life was not.

I got too focused on trying to force Courage to be a show horse and made some really stupid choices. He got very overfaced in a lesson and it recreated all the anxiety I've spent so long working through.

I like to blame the circumstances, but the truth is, I would have been money ahead to just give him the month off instead of trying to ride through all the stress. Or you know, just not jumping.

We did some fun trail rides and had a fun show practice at the barn. We made progress in dressage, and that's always useful.


So apparently, overfacing yourself and your horse and then going straight to a show that you're under-prepared for is not the best idea anyone ever had. Not even the same level as sliced bread.

In case you were wondering.

So instead of talking about how terrible the show was and how screwed up Courage and I were, let's talk about how we got over it.

We went trail riding and we played western pony and we lunged over jumps and we tried to rediscover the fun parts of riding.

It was crazy hot and I felt like I barely rode, but that mostly isn't true. We opened the month with Courage getting some time over fences on the lunge line. Then redheadlins popped him over 2'11" oxers with all the cameras going.

I made decisions like a smart amateur, both backing the pressure off and letting Courage get comfortable jumping again with a better rider in the tack.

It's not that I didn't try it--it just wasn't working out for us. 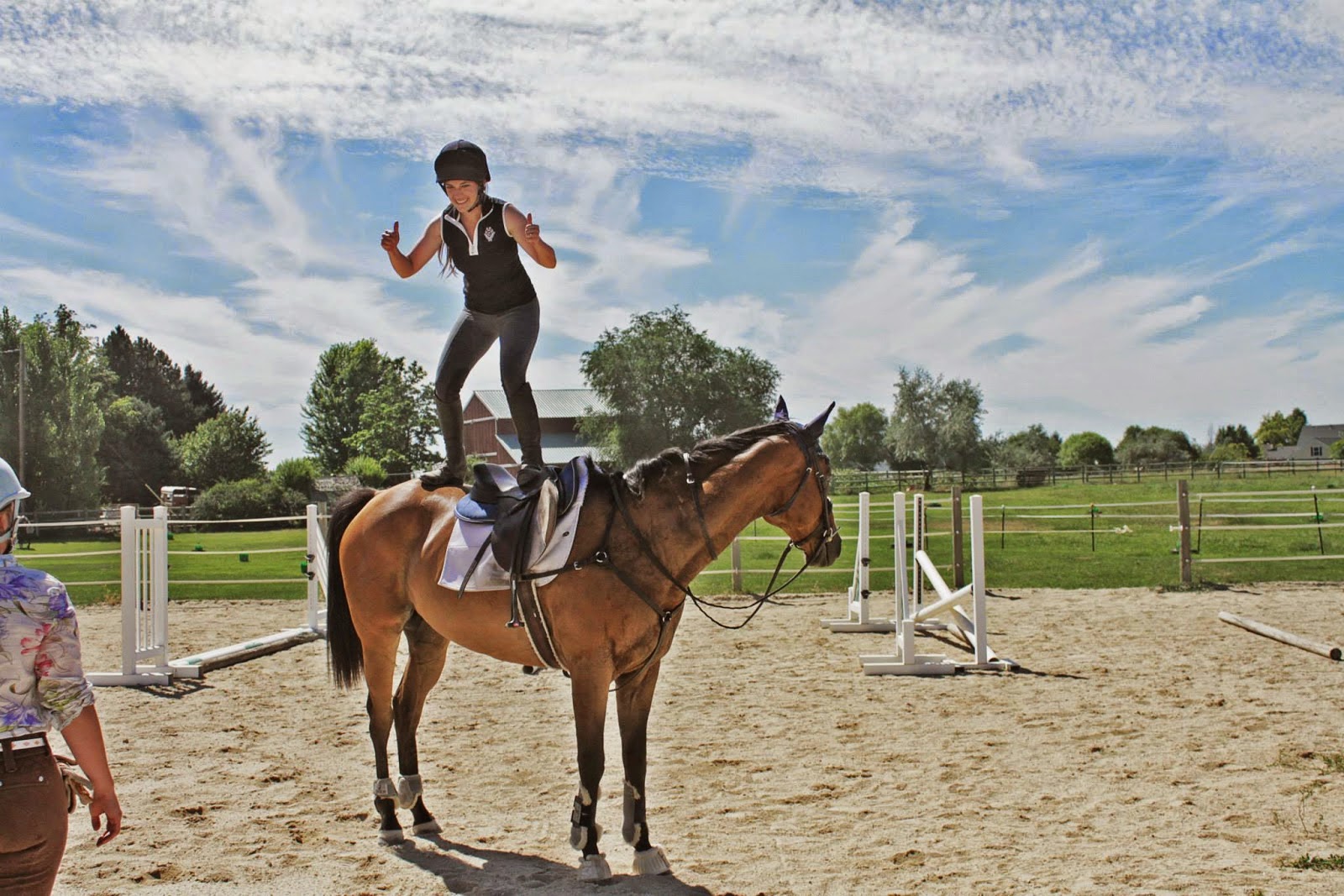 Other milestones included Courage and I celebrating our one year anniversary together and me recognizing that Courage was really turning into "my horse" instead of just the green project that I picked up.

Besides, he was picking up the flat work and learning new things.


We played a lot in August. Courage had a whole host of different riders, from horse show friends to first time beginners. We did flat work and hacked in fields and didn't stress too much as we totally missed shows I'd been hoping to attend all year.

I started up one of my all time favorite blog series about regaining my jumping confidence.


It wasn't exciting or glamorous, but we were laying a foundation in a steady, day-to-day grind. I could see flashes of progress, but horse training tends to be more little increments than blinding flashes of genius (at least if you're me).


September had moments of brilliance. Courage and I took lessons with S, which brought us my all time favorite jumping picture of us so far.

I rode great, Courage was on, and our good moments made it all worthwhile. I also talked about my history with horses and how that changed my interactions with Courage.

Much like the rest of the summer, though, I struggled with being very discontent with where I was at. I wanted Courage to advance faster and I wasn't happy with the options available to me.

I had to be careful to not translate that to my under saddle work.


I had a lot of fun this month. My rides weren't the most consistent due to traveling every single weekend and some during the week, but Courage and I were connecting really well. Ellie took some unforgettable shots of Courage.

There was lots of progress in the rides we did have--Courage had some wild moments, but he also had excellent ones. We jumped skinnies and cleared our first 3' jump.

Courage was definitely going through a challenging phase, but I was stepping up to the plate and riding him through it without constantly relying on trainer rides to save me.

(I mean, there were still trainer rides, but more for a different perspective than because I thought I couldn't.)

Courage was being wild again.

Just about the time I got him sorted out and we started to make progress, an epic winter storm came along and prevented all riding for about two weeks.


I cracked under the pressure and moved Courage to a new barn with a dressage trainer and an indoor.

To my great surprise, all the things we'd been working on sunk in during Courage's down time, and I had a willing partner again.


I realize we're technically only about halfway through the month, but I'm not anticipating any major changes here. Courage and I took our first dressage lesson (not just flat from a jump instructor). I learned SO MUCH and Courage is going in a whole new, awesome way.


We've played ponies and brought the puppy out and I am enjoying the HELL out of having an indoor this winter.

Courage is reminding me every day why it is I wanted him in the first place.

It's not the year I wanted or planned on or dreamed about, but it's the year I had. It wasn't one of those years that makes people stop and go "wow, look at how successful she is". I'm pretty sure my show/event friends think I'm completely nuts for dropping off the face of the earth and not even trying to push the envelope.

But you know what? Despite our lack of material progress, Courage and I are a far better team now than we were at the beginning of the year. We have a bigger tool box, a more advanced skill set, and a stronger partnership. I'm happy and confident on him, whether it's our first ride in an indoor or popping over new jumps at home. We'll let next year worry about itself.
Posted by SprinklerBandit at 7:00 AM