Now, obviously there are a LOT of factors that go into both of those, but there's one factor I wanted to play with: braiding.

You see, he was totally rideable at both the shows we didn't braid for and a loony toon at the ones that we did.

We did braid for one show last year, but that wasn't until he'd been getting out and showing a lot and then we had other issues.

So here's my hypothesis: Courage is a sensitive horse that likes to be tight in the neck/back. Tight braids exacerbate that tendency and increase the amount of tension I have to ride through.

To test said hypothesis, I read Austen's write up of how to do her fluffy loose braids, bought myself some yarn and a needle, and went to work. 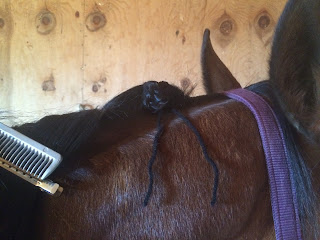 I was really, really glad I was doing this in my free time at the barn--it definitely took a few braids to get the hang of it. By the time I got to the last braid, I finally figured out a specific method I liked best and of course, next time will be better. 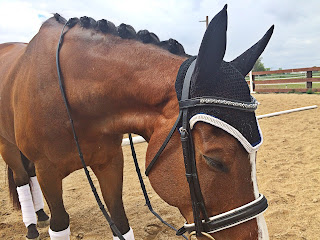 Here's the really interesting part. Courage is an old warhorse who's totally used to be being messed with and pretty well lets me do whatever. He does hate mane pulling, but he tolerates it without escalating. When I braid, he just stands with his head down and lets me go nuts. No problem.

When I finished putting in the floofy dutch braids (which are super loose and don't pull his hair), I stepped back to admire my handy work.

He instantly started licking and chewing and yawning and stretching and it went on and on and on. 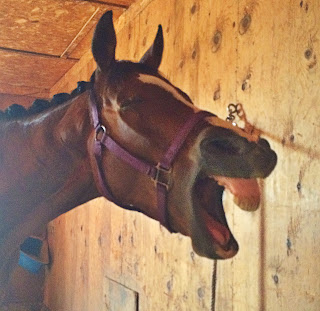 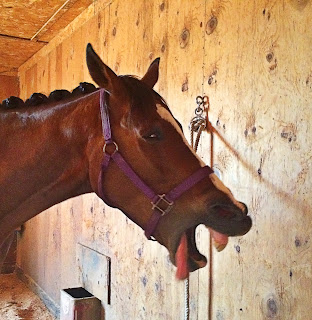 He got really in to it.

He's never had that reaction to braiding before. Not even sort of. He's always just been sort of resigned to his fate.

What's more (since I have a lot of time on my hands), I then tacked up and threw him on the lunge line.

I mean, a big storm was rolling in and he was a little up, but he gave me some of his best work yet. A huge part of that is all the under saddle work and lesson (sorry, need to do a write up) we had, but he was slow and cadenced and even sort of looked like a dressage horse.

Obviously, the braids didn't turn him into a dressage horse, but I'm starting to wonder if they might be another piece in the puzzle for us. I mean, when I took them out in his stall (with scissors because whoops didn't get a seam ripper), I didn't even halter him. He just stood next to me with his head down and his eyes closed and let me take my time. 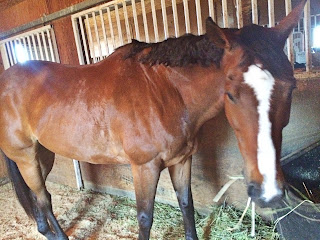 Of course, to fully test my hypothesis, I need to ride him in braids, both at home and at shows. Until then, I'm intrigued by my preliminary results.
Posted by SprinklerBandit at 7:00 AM