I think it was Emma who said that every time I give y'all a tour of my tack room, the major players have changed. I would like to point out that is only partly true.

THE PRECIOUS IS STILL HERE 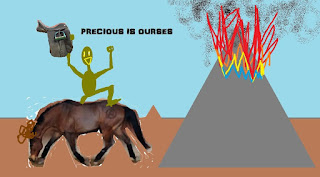 Ha! But actually, my saddle inventory is remarkably stable. It's the bridles that change up a lot. Right now, we have three main bridles in rotation. 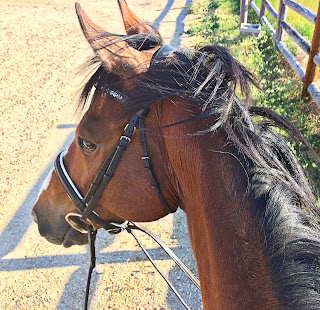 This is our work bridle. Courage loves his sprenger bit and I love looking at this bridle. And YES I KNOW the buckles aren't all the same color. Remember franken? That's why. 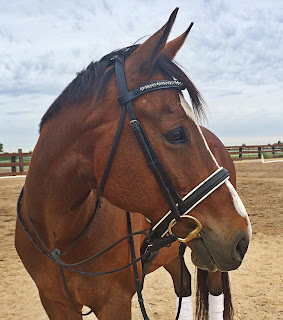 You've read about dressage frankenbridle before. It's a really fantastic piece. You'll notice the (beautiful) cavesson is adjusted so loosely that it literally does nothing other than hold the standing martingale in place. This is for REASONS--specfically that Courage does not deal with sharp bits or tight nosebands and every trainer he's ever spent time with (even the ones who hated him or whom he hated) agreed that a loose cavesson was really where it's at for him. 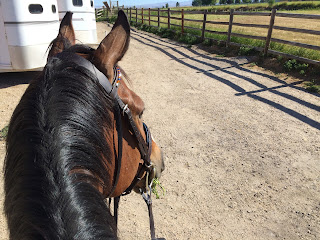 Next we have our hacking bridle. It also features the loose cavesson (and standing martingale woo woo). We have what I call the "magic contact bit" (GIANT single joint d) on it, which is a bit hilarious because I never pick up the reins in this bridle. 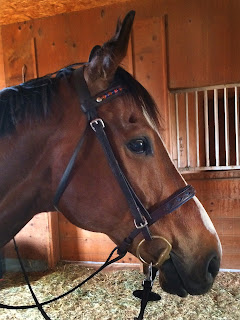 This bridle is fun to look at--it has my cool custom race noseband with blue padding and diamond shaped cutouts and my super cool blue and orange sparkle browband. The whole point of this set up is to let Courage know that when he wears it, all is well with the world. We toodle in it. That's all. He loves it. As soon as I put it on, he pricks up his ears and we go adventuring. 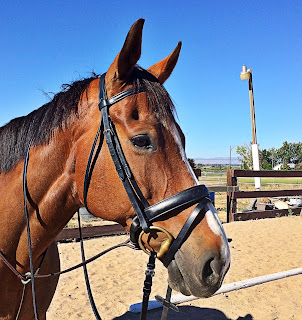 What's this? Didn't I just go on and on about how Courage must have his loose cavesson?

This is our lunging bridle. It's my gorgeous Red Barn Capriole bridle that I love very much with an identical sprenger to our work bridle. It has a crank and I usually pull the flash off, BUT. Always a but.

But Courage is stepping up his game and learning to accept contact in a much better way and from time to time, while lunging, I find it advantageous to ask him to actually close his mouth while he's working.
It's definitely not his favorite thing and I don't think it will be going away from home any time in the near future, but it's a tool in the tool box and we're giving it a whirl.

I guess at this point you're also noticing that Courage ALWAYS goes in a standing martingale at this point in his life. Here's why: 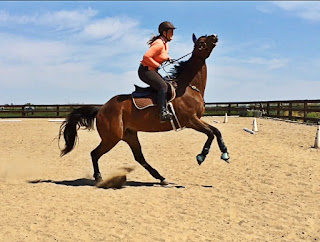 Most of the time, the standing hangs uselessly. All y'all rules Nazis out there are like "ZOMG SB THATS NOT DRESSAGE LEGAL", which hellooooooo I am well aware. I'm also aware that every time Courage has a big giant flailing fit (which in fairness to him are usually caused by me), that response takes weeks to work through. Weeks.

Remember the last (/only) time I jumped him this year? Yeah broke my steering and my brakes in one fell swoop because I didn't put his martingale on.

But the standing causes nobody any problems until the penultimate moment and then it acts on his nose, he goes "oh shit right gotta stop this nonsense" and the world keeps on spinning. 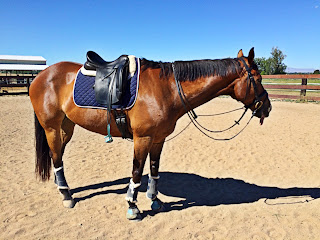 Magic, I tell you. Once we're thinking about showing again, I'll wean him off it. Til then, it stays.