I would just like to point out that the lack of wildly over-the-top flailing pictures this year is actually not because of a dearth of excellent local photography, but because the FLAIL AND LEAVE NAOW BAI response in Courage is much, much reduced.
I know I've said it before, but Courage is a really complicated horse. He takes a thinking ride, every step of every day. I've gone on and on about how the "correct" response to difficult situations is rarely the Courage-approved response.

And this year, I'm finally figuring out how to work with that.
Courage flailing is Courage screaming that he can't mentally handle what I want. It's not Courage ducking work or Courage being a dick. He has a great work ethic and while he can be an asshole, he's actually pretty sweet most of the time if he isn't on the defensive.

So when Courage tells me I CANT, I've learned to immediately ask, "what can you do instead?" 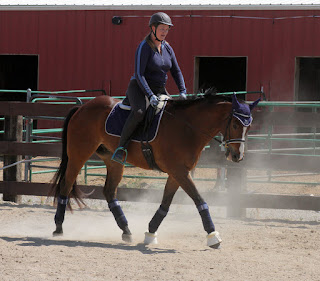 It's taken a while, but it's working. He's learning to trust that I won't ask for more than he can do and that I'll listen when he says stop. That means that he's more willing to try things because he knows he has an out if he gets overwhelmed.

It's unconventional, but it shouldn't be. It's more like a conversation of equals than a master/beast hierarchy. It certainly wouldn't work if Courage was lazy or mean, but he's not. It also doesn't mean that Courage can say "eh, rather not" to get off the hook. I pay his bills with the expectation that he will step up and do a job an hour a day and he has to deal with that.

It's just that I've recognized that I'm not going to out-muscle, out-fight, or out-last him. The direct methods don't get through to him--they piss him off. Instead of being mad at him for being pissed off at me because I'm being an asshole to him, it makes more sense to just calmly say, "ok, what can you do?"
Right now, that answer is most frequently "walk on the buckle".

Sure, walking on the buckle isn't something that's "hard" or "cool" or "TRAINING" in a typical sense, but it builds his confidence in me and mine in him.

What's more, the flail fits have been primarily prompted by me asking Courage to push from his hind end and carry himself more correctly, which entails moving his back. While he's hardcore struggling with it at the trot, when he tells me that all he can do is walk, he offers a more connected walk that pushes from his hind end and moves his back and then he carries himself more correctly. 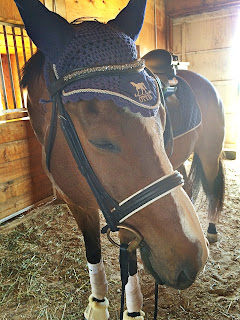 It's in there. He's figuring it out. Rage, intensity, and pressure will only set us back. It's amazing what we can do with patience, understanding, and communication.
Posted by SprinklerBandit at 7:00 AM