It's easy for me to be upset about my perceived lack of progress with Courage right now. Let's face it: I failed at a big goal of going to a recognized show and won't have another chance until next year. Things sometimes seem unhinged and we're slowly working through first level, which is apparently really, really hard for a Courage brain. Instead of being upset about that, I want to look at where we are relative to where we've been.
In 2013, I didn't even have Courage until the end of July. He was a skinny, fit straight-off-the-track racehorse who had no idea what this whole new life was about. The only thing he knew for sure was that he didn't want to be a racehorse any more.
In 2014, we went to our first ever event derby at crossrails. We did a walk/trot dressage test. It was a week after a disastrous jump lesson that fried both of us and Courage was not in a forgiving mood. The dressage was acceptable(ish) and we got disqualified jumping. It wasn't pretty. I didn't have a reliable go button and I did have major jumping issues.
In 2015, we went to the same derby again. We dropped down to ground poles. We were coming off a couple of very rough months and I decided that either he'd pan out as a show horse or he'd go away. Again, we did a walk/trot dressage test (which was lovely) and then somewhat redeemed ourself in the jump round. We finished on a (very high) number and kicked off the season which culminated in our first-ever tri color ribbon.
2016 found us once again at this particular derby. We've given up the notion of jumping competitively but we went out and put down a dressage test with cantering. Courage was probably the most rideable he's ever been at a show and while it wasn't brilliant, it was a good enough test for that day. 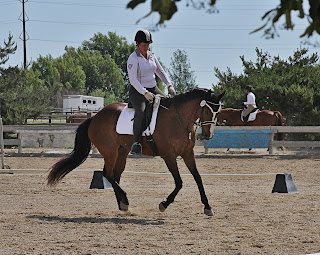 So. Yeah. Instead of doing ALL THE SHOWS this year like I so desperately want to, I'm staying at home and explaining dressage to Courage, step by tedious step. It's not always easy, but I like to think it's paying off. He's not just a skinny OTTB any more--he's added muscles all over the place. Together, we're building the foundation for future success. 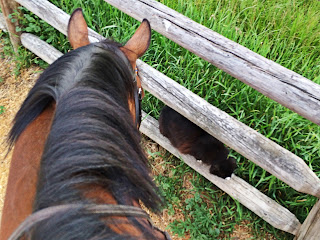 And if I take my time now, the horse I built one ride at a time will march into the ring and lay down a test to be proud of.
Posted by SprinklerBandit at 7:00 AM