My Horse is Maybe a Rockstar Diva Princess (or not)

So Karen started this thing where you take a fun personality quiz for your horse and then get a cool personality profile. It's like the equine meyers briggs, which is super cool (if you're a raging nerd, which I am). 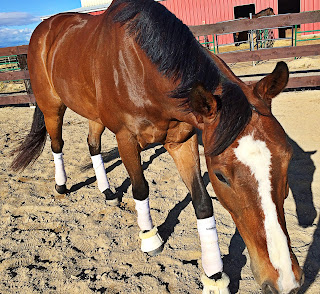 Anyways. I'm sorry I forget who all has done it since then, but a bunch of people took the quiz and were like "wow look at this great insight I got for training my horse based on an analysis of his personality", which is great.

So I jetted myself off over there to take it.

And was immediately stymied.

1) At feed time, does your horse eat in the top half of the pecking order?

That's cute. They forgot to include an answer for C. It would go like this:

d) spent whole life in stall--has no concept of social boundaries--banned from herd interactions due to immense risk to human life
I mean, there was one winter where he lived outside with one other horse for a few months but uh... yeah so he ate his buddy's tail and the lining of his buddies blanket and was completely uncatchable. We have tried him in several different group turnout situations since then with varying levels of fail. He plays like a lunatic, chases the other horses, becomes impossible to catch, oh and the funnest part: when you try to catch his pasture buddies, he will chase them over the top of you because HE'S NOT DONE PLAYING WITH THEM YET.

It's flat dangerous to human life and not worth the risk to anyone. Including him. Because he annoys the hell out of the other horses.

2) Is your horse easy to get to go forward?

And then there's C's answer:

I dunno how many questions are on the quiz, but so far there really hasn't been a reliable answer for him. Let's try question three:

Again, I can't really answer this. Sort of? Not really. It depends. I tried introducing the yoga ball this winter and he literally had no interest. I had a tarp blow up in front of him and he didn't even blink. He didn't used to be afraid of judges at dressage shows, but now he sort of is. He's never cared about little white dressage fences... so I wouldn't say he investigates things? Let's just write in another line:

d) Courage does what Courage wants


I mean, I could pick "sometimes" but that's literally half-assing it and telling me nothing about my own horse. Ahem. So question four:

4) Does your horse like to be touched, petted, or groomed?

HOW IS THIS A QUESTION? You'd think they could throw me an easy one somewhere. Courage is a very, very interactive horse--he likes to be up in your face and eat cookies and get attention, for sure. But when it comes to people touching him (vs him touching them), it depends. He's very sensitive, tends to be stand-offish, and has strong opinions (surprise! not!) about by whom and where and for how long and what they're doing. Some days he wants me to scratch his neck for an hour. Some days he wants everyone to go away. The difference between those days is in his mind alone. We'll make a C answer up again:

d) Be the molester, not the molest-ee.
I could go on--the quiz likes to ask lots of questions about hierarchy and herd dynamics. I think I already covered that pretty well earlier, but 6 years in a stall does not a socially-well-adjusted horse make. Courage is going through a weird delayed adolescence/something that isn't good or safe for anyone. He doesn't live in a herd. He doesn't know how. Yeah, maybe he could learn how, but I don't keep a horse for the purpose of turning it into a wild mustang and my interest in setting him up for serious herd-induced injury is zero. 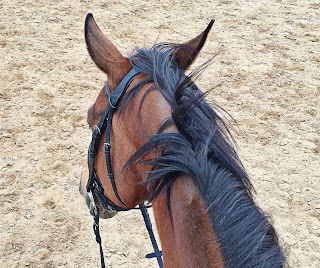 And then there are things like "Does your horse need to have a purpose?" to which I say "dear god I hope the only one in this relationship having an existential crisis is me" and "Does your horse like to be controlled?" which is probably the only easy question on the test. HELLZ TO DA NO BITCHEZZZZ.

My best bet for quiz results is just to read through the answers and see which one sounds the most like Courage, but that takes the fun quiz element out of it.

Which is to say.

My horse may or may not be a rockstar. THE WORLD WILL NEVER KNOW.