I had a jumping lesson yesterday. We only did tiny jumps, but it was very educational. First off: due to intense amounts of smoke and inhibited amounts of ambition, Cuna and I have not been working terribly hard. Every clear day, we did trot sets in the hills with the occasional 10-15 minutes of dressage thrown in. Not much jumping and very little riding without stirrups.

Sooo... we started by cantering through a line of poles 60' apart. I got four strides going, five strides easily, and I thought I was going to die of exhaustion before I got six. I was breathing like an obese asthmatic just trying to get a canter, never mind making the line. Steph's diagnosis: more work without stirrups to improve body control/half halts so I can bring Cuna back without going to my hands. Oh, and we did make the 6. Eventually. 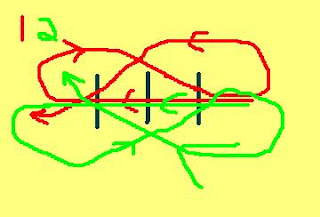 Then jumps! There were three crossrails set 18' apart down the center of the arena.

Course #1 followed the red line: down over the three, then right rollback over the first jump in the line, then left roll to the last jump. Keep in mind: 18' between the fences means I had to ride -very- accurately to place Cuna at the center of the jump. It also increased the variability of the possible striding to the jump. Depending where we jumped it, we could make more or less room.

The first time was ok, not great. I had a steady rhythm coming in and a great balance through the triple (weight in heels ftw!), but I got rushed after the jump. I pulled Cuna around the first rollback and he dropped to trot. I didn't decide in time whether to trot or canter and the line was not great. We squeaked around the second rollback, but again, I didn't commit to any particular line and a wiggly-er horse wouldn't have jumped the last one for me. Dear Cuna: I <3 you.

After a chat with Steph and a chance to catch our (my) breath, we tried again. This time I broke it down into sections, as per Steph's instructions. I developed a good rhythm coming in. Then I stayed in balance through the triple. Then I rode a straight line to give myself space. Then the rollback. We stayed in canter (thank you, outside aids). I picked my line to the crossrail, counted from four strides out. Good. Then ride straight after the crossrails. Now right rollback.

Did I mention Steph had put the last crossrail up to a 2'6"ish square oxer? Not huge, but oxers are kind of still a mental block for me.

Anyways. We stayed in a balanced canter for the rollback. I committed to my line and counted the last four strides. Boom. Oxer. Thank you.

They weren't big jumps, but it was a technical exercise and I was actually quite pleased with how I rode. I meant to ask Steph to take video so I can check my progress, but I forgot. Oops. Maybe this weekend.

Unless, of course, Cuna came out lame on both fronts today.

Good news: I have learned to take a digital pulse. It's way easier than it sounds.
Posted by SprinklerBandit at 1:52 PM