Since someone's princess horse can under no circumstances wear neoprene boots, I did whaat any responsible tack 'ho would: got him three different kinds of fluffy boots in designer colors. Let's talk about them today. 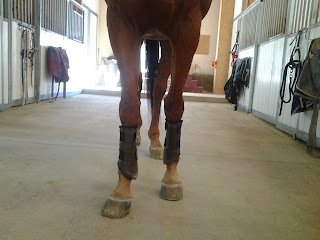 Pair #1) Toklat Valena boots. I paid $15, a new pair is about $70 Fellow blogger Rinsie actually found these with me at our local tack store. Unlike the pretty Dover picture, they have black fleece. They are used, and it shows--stitching worn out and even replaced in some places. The exterior material is tough and flexible. The interior seems to be synthetic fleece. It's black, which I think is just tacky on a brown boot. That said, they cost $15. 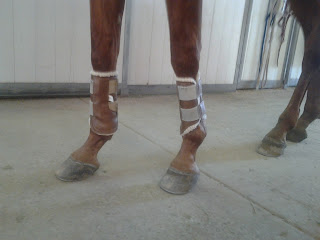 Pair #2) Euro Pro Heidi Galloping boots. These I found used online and got them here shipped for $30. A new pair runs around $75. They are in much better condition than pair #1. The fleece is thick and protective and the velcro is great. That said, the exterior color is... eh... pretty light. I knew the velcro would be light colored, but it's almost more caramel than havana, so I don't love them. 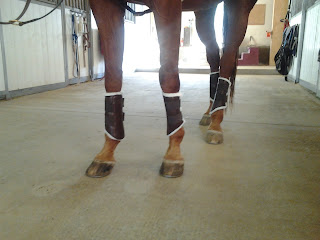 Set #3) Dover Pro Sport Boots. Excellent fellow blogger Me was headed out tack shopping and let me virtually tag along. She picked up a full set of these at the Dover tent sale for $40, which is good Dover sale pricing. The exterior material is very stiff and vinyl-y feeling. It's a great color and the synthetic fleece on the inside provides a great contrast, but my feeling (and information) is that these simply won't hold up the way the others will.


All three of the different types are interesting. I'm the least impressed with the Toklat boots. Admittedly, they are in rough shape, but who makes brown boots with black fleece? Ick. There are pretty light weight, too. It seems like they're going to heat my horse's legs like all of these models are prone to without providing the extra protection from either a stiff exterior or super fluffy fleece.

From a technical standpoint, I really like the heidi boots best. The exterior is giving enough that I don't expect rubs from Mr Princess like I would with a hard shell boot, but it's strong enough to withstand some knocks. The wool backing is super thick and nice, and the velcro is great. I do not love their color, that is for sure.

For occasional use, I have to give it to the dover boots. Man, they look classy. They capture the exact look I wanted on Cuna. They may be the cheapest, but they are sexy. You know, new, straight out of the package. Talk to me again in the spring after a winter of use, and we'll see what I think. In the mean time, snag yourself a set of the Heidi boots.

Don't worry-I didn't have Me squander a whole trip to Dover just to get me a set of boots. She also snagged a fly bonnet for $8.99. It may not be Cuna's favorite color, but it does the job and looks alright on him.

Ok, it's better than purple anyways. ;-) He definitely appreciated the bug relief it provided.
Posted by SprinklerBandit at 12:32 PM