For various reasons, Cuna and I haven't had a lesson since our last show. I was super excited for today, since we were on the schedule.

Then I showed up. The smoke is not so bad today (hooray!!), but the main arena is having it's footing redone this week (hooray!!) and that means super dusty air and constant heavy equipment noise.

I know, I know. First world problem. I will be oh-so-happy this winter when the main arena actually drains properly. 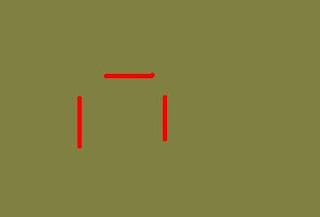 Anyways. Lesson. Here's the arena diagram for today. Red lines are jumps. Because of the equipment noise, Steph would give me a pattern, then just let me keep jumping it until I felt the need for feedback or I noticed her frantic gesturing in an attempt to get my attention.

Unfortunately for all involved, I just could not get my head in the game today. It did not matter how many times she told me a pattern: it just wouldn't stick in my tiny brain. Seriously. It was sad.

Anyways. My legs were waving in the wind, my torso was mirroring, I couldn't ride a straight line to save my life, and Cuna actually had one of the biggest spooks of his life because Steph moved a jump standard (goof head). He in fact relocated all four of his feet and moved his body like a projectile for a whole stride, so it's at least top 5.

So we stopped to regroup. Steph put my stirrups up two holes, and off I went.

This time was better--my body and leg felt rock solid. I kept making stupid decisions and forgetting the patterns. I mean, you wouldn't think two stride line, turn right to the vertical, turn left to the two stride in a repeating pattern would be difficult, but yeah...

Regroup. Again. This time we talked about making decisions sooner and being perpendicular to the face of the jumps.

At this point, a couple of people showed up that Steph needed to talk to. Cuna and I walked and caught our breath, then started up on our own. Two stride away from the barn. See a close distance. Stay soft with seat, but close to the saddle. Close the hand. Boom. Two easy strides. Jump. Around to the right. Look now!! There's the line. Solid with the outside led, aim for the middle. Boom. Turn left, outside aids. Flying change? Ok. A moving distance. Leg on, don't get ahead. Jump. One, two. Jump.

Steph is yelling something. Apparently I am turning the wrong way. Oops. We rode through the pattern one more time, this time making the correct turns. Cuna, Mr I-Don't-Do-Lead-Changes, nailed every change. I rode like I'd actually been on a horse before. We were rocking, albeit over tiny 2'6"ish verticals. 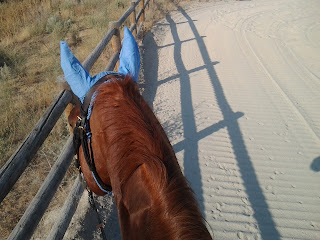 The takeaway:
1) I need to get my head on straight. I'm blaming smoke inhalation+construction chaos for today, but seriously. They weren't hard patterns and I could not keep them in my head.

2) With Izzy, I'd ride straight after a jump, then change the bend and get a lead change. Cuna HATES that ride because he hates losing his balance. Instead, when I focused on riding through the whole turn on a consistent bend without changing his lead, he gave me flying changes. Random, excellent.

Novice, here we come!
Posted by SprinklerBandit at 2:32 PM