After the beautiful clear skies of yesterday, I had big plans for today: long run with the dogs, lots of no stirrup work with Cuna, riding in the pelham with two reins, maybe some jumping.

And I woke up to choking smoke, thick as it's ever been. I hate you, range fires. Where did my sky go? 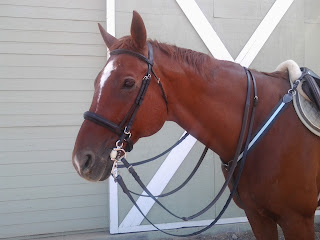 In an effort to keep from puking from smoke inhalation, Cuna and I took a long slow hack in the hills and explored new trails. I rode with both reins and it went ok. It would be nice if I had reins that were somewhat close to the same length, but this is as good as it gets right now.

It was not as hard as I thought it would be, though admittedly, I mostly just walked and did a tiny bit of trot on gently turning lines. 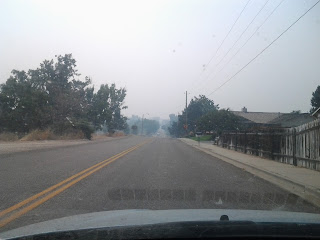 And then I was off home. Through the smoke. This is actually from this morning; it's worse now. Ugh.

Posted by SprinklerBandit at 4:21 PM