I'm still waiting on XC pics, since apparently people other than me have lives. That's cool and all, so let's talk about dressage.

At our last show, the dressage scores were all between 5 and 7. Consistent, unimpressive, reflective of where we were at. I'd share some pictures to back it up, but there aren't any. So it goes.

This time, we stepped it up several notches. I finally learned how to get Cuna to go like a horse (instead of a camel) and he responded well. I swear that horse grows muscles overnight. We had much better engagement, some motion through the back, and even a decent frame most of the time. There is room for improvement, but more in a point or two here and there instead of the whole freaking thing. This time we scored everything between 6 and 8, so again, consistent.

We had good and bad moments. Let's start with bad, so we can end with pretty pictures of the world's cutest old red man. 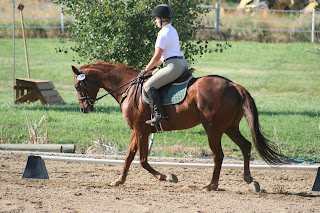 Trotting is our best gait, but that's not to say we've mastered it. Cuna takes a lot of leg. In this shot, I've continued holding him up with my hands but dropped him with my leg, and he's falling on his forehand accordingly. Need more core, more leg. 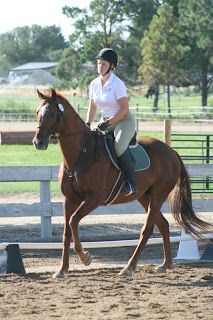 You may (or may not, I suppose y'all have lives too) remember that our first canter was less than stellar. I surprised him into it, then had my reins too long, my body too forward, and if I know anything about myself, my hips were tight and my body was likely swaying in the wind. You know, because that's attractive.

Cuna is responding by running forward on the forehand with his head up and his nose poked out. We are about to get one of our low scores, the super resistant trot transition that is almost late.

Ok, I've about had it with ugly shots when there are so many cute things to enjoy about our test. Let's talk good moments for now. 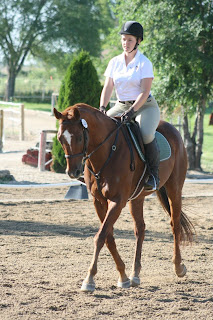 I'm sitting up and riding. Cuna is obedient and engaged. I really should be in a dressage saddle. Those pants are unflattering.

There is a reasonably good line from bit to elbow and Cuna is cute and alert. 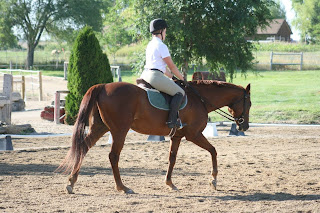 Free walk on a long rein. This is actually another of our low scoring movements, but I'm pretty proud of it. Nothing about this is natural to Cuna--he likes to go fast with his head in the air and jump stuff.

I had to carefully ease him around the corner and slowly let him take the reins out of my hands while keeping LOTS of leg on to encourage forward and sitting VERY still so he didn't jig. Oh, and too much leg also meant jigging. Complicated balance to strike. We'll keep working on this and developing his dressage muscles, but it's not really a strong suit for him. 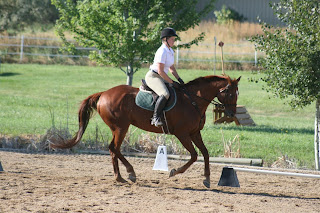 We had a bad canter, but we also had a good one. This time I remembered to prepare him for the transition and stay really, really steady with my hands. He stepped right up into it and stayed quite round.

I'm riding in a jump saddle, so "dressage position" isn't really happening, but I love how harmonious this shot is. 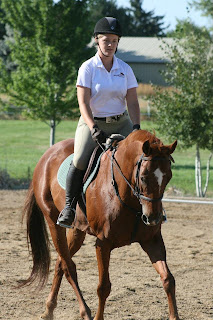 Random adorable trot shot. I'm not really sure where in the test this is, but I love this picture. Cuna is engaged and alert and I'm even sort of looking where I'm going, all of which are good things.

I mean, seriously. How cute is that face? 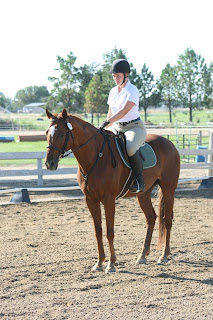 And the final halt. I think we actually didn't get a great score on this, most likely because I gave up the whole "legs and core" thing and stopped him with my hands at the last second, but it isn't bad considering. Cuna is about 90% square and submissive and I look pretty balanced. A nice end cap to a nice test.

We still have plenty to work on. I need to use my core more effectively and get that leg engaged. Just think how toned I'll be when I can finally ride a long horse correctly. I need to get my thumbs up, my eyes up, and my butt more in the saddle.

Speaking of, I am seriously coveting one of those old brown stubben dressage saddles in a medium or narrow... Think how rocking the old guy would look in that!

Posted by SprinklerBandit at 4:42 PM