Due to Cuna's unfortunate ability to never again wear neoprene boots and my intense dislike of constantly washing and rerolling polo wraps, we needed to find a solution.

Of course, I already had something in mind. I'd been wanting fluffy brown boots for a while anyways, and now there was a medical excuse to get some!!

I knew there was no way my local tack store would ever stock something useful, so I sent out feelers throughout the internet in search of the best deals available.

Then I went to my local tack store's fall sale.

GUESS WHAT???? Some kind soul had dropped off a pair of front Valena Toklat boots in brown with black fleece. I hate the black fleece and the boots have definitely seen better days, but $15 later, I am not wrapping front polos for a w/t hack. Winning! 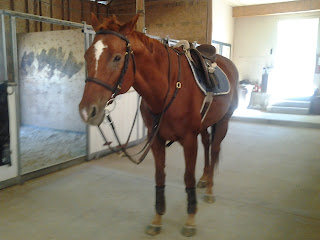 I actually have another used pair of fleece boots headed my way, plus a whole set of new ones and I look forward to comparing all three brands and coming up with the definitive set of fleecy boots.

Notice anything else different? 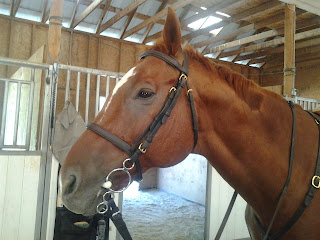 The local tack store also had a three ring Dr Bristol happy mouth for 40% off. I didn't need on per se, but bits never go on sale. Of course I had to pick one up.

We cantered over three tiny jumps and he was super. Unfortunately, there are a ton of local-enough forest fires right now, and the air quality is so bad that I felt like puking after that teeny workout. Here's to rain or a windstorm or pretty much anything that would break the current weather cycle. It's nasty out there.
Posted by SprinklerBandit at 2:01 PM