As you probably know, we were running the local, unrecognized horse trials this weekend. Cuna and I have been to two jumper shows and one derby (dressage, then xc/stadium as one phase). This was our first ever three phase horse trial. We've only had one jumping lesson recently, but after getting a 38 in dressage at our last show, I decided it was time to step up our game in dressage. We took three lessons from ST and busted our butts practicing, then got Cuna's hocks injected.

I went into the weekend with two goals: 1) improve my dressage score by 5 points. 2) Bolt for 50% or less of the XC course instead of the whole thing.

Saturday morning, we rode dressage bright and early. I got Cuna ready too early, but he came out great--forward, responsive, balanced. We worked on some of the stuff from our lessons and totally impressed Steph, who hadn't see the new and improved version of us.

Next I made friends with the girl carrying the biggest camera I could see and talked her into getting some shots of us, because I've been dying to see how cute Mr Dressage Cuna can be.

I trotted Cuna around the outside of the ring a couple times while we waited for the judge. He was a little spooky in one corner, but I used the full array of his experience to my advantage, and he calmed down almost immediately. Good boy!

I realized BN test B is not the most interesting thing in the world to read about, but hey, it's what we did. Cuna trotted nice and straight down centerline. He was about 150 pounds in my hands, but he was using his back end and going forward, so I just smiled and kicked on.


Our potential bugaboo in this test is the fact that the freewalk is the movement with the coefficient, and let's just say it's not our strongest move. ST and I had discussed this. She helped me with generating the best possible walk for Cuna and I and then reminded me that since I would lose points here, I needed to not give them away anywhere else.

I'm actually quite pleased. He stayed nicely round and didn't jig at all. It was a hard earned 6.


Our first canter transition was not a thing of beauty. I was a bit tense and I cued too strongly. Cuna LEAPED into the canter and gave me a full-blown pony nose. Fortunately, I managed to stay quiet and with him, but we had a struggle to get back down to trot as quickly as the test demanded. I think we made it at the end letter.

Our second canter (pictured) was much, much smoother. We were spot on our markers and he was nicely balanced.

Cuna was pretty much over the whole dressage thing at this point. He maxes out around 20 minutes, so I put him away, dressed him in fly gear and let him have some "me time" at the trailer. All ingredients to a happy Cuna.

When the tests were finally scored, I scooted into the office to find out what we got...

Cuna got a couple of hours off while I obsessively walked and memorized my XC course. Nothing on it looked overly huge, but I wanted to 100% know where I was going and how I was getting there. I didn't allow myself to think over the details too much. Any time I started to obsess, I redirected the energy into remembering the exact course map. I even selected certain jumps to serve as markers, like "If the drop is 4, I need to have jumped 3 already. Which ones are they?"

Before I reached the boiling point, they got the show jumps set and it was on to learn another course. 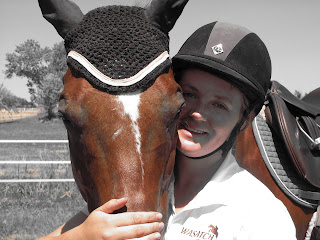 I'll be honest--the jumps looked pretty small and unimpressive to me. The course was nice and flowing and I had no concerns about it. Of course I was taking it seriously. I mean this is me, the obsessive addict, we're talking about, but even so... 2'7" just doesn't really scare me anymore.

I hadn't accounted for my minimal show experience as an adult. Despite a course which would have bored me out of my mind at home, I got super tense for the first part of the course.

I tried to keep Cuna slow by pulling on him and then jumping ahead, which is a combination of the things he hates the most. Not a great idea.

He had a head flipping fit, but kept cantering forward and jumping clean. 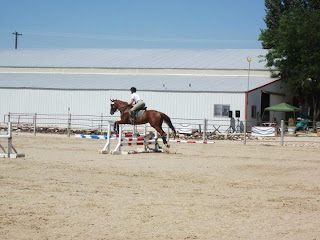 About half way through the course, I realized my maybe if I let the old man canter forward to the jumps, he would be happier.

Magic. All of a sudden we found our rhythm and looked awesome.

So awesome. We are FANCY!!!

The joys of having an ol' broke horse: Cuna never touched a rail or looked at a fence. We finished the course double clear. 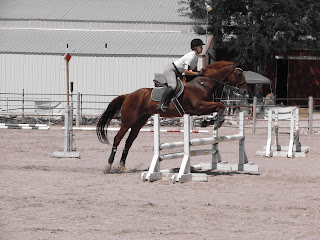 Because we are rocking.

The nice girl with the giant camera, my mom, and a friend of mine all took SJ pics. So many fun options! Thanks all!

Sunday morning was XC time. I stayed calm and focused and even had a decent night's sleep, which speaks volumes for my much improved anxiety levels regarding solid obstacles. I walked the course one last time, visualized it about 50 more times, and started to get the old man ready at a leisurely pace.

I decided to gamble that Cuna wouldn't get rubbed by his newly-scrubbed neoprene boots and then added a running martingale to give myself some extra leverage just in case.We looked legit.

I had some nice warm up on the flat. Steph was busy warming up the girl ahead of me, and I needed to stay in my head, so I went calmly about my business. When the girl went in, I was supposed to have five minutes. I canter the crossrail once, the vertical once, and the oxer twice. Cuna felt awesome, so I brought him to a walk and headed over to the in gate lady... only to see the hind end of the third refusal of the girl ahead of me.

Our turn!! I'll save the more in-depth course recap for when I have XC pics (oh yes, they exist!!!!), but we were rocking all the way through. I'm very, very happy with how I rode and absolutely thrilled with how Cuna went. A couple of times I got in a little crooked, and he totally fixed it for me. What a guy!

I'm pleased to say that the new bit was just right. Apparently, BN XC is not nearly as exciting as galloping ridge lines, and I had just the right amount of brakes. Well, that and the footing was a hair slick, and the old dude wasn't going to skid out. That would just be silly.


In place of a proper recap, I leave you with a picture: 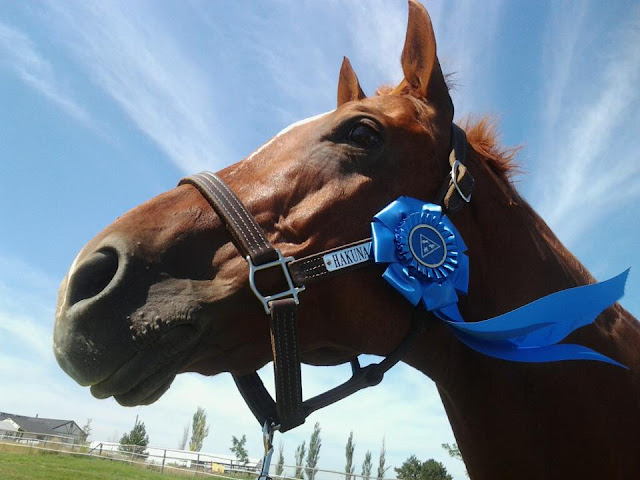 We are the champions!

Posted by SprinklerBandit at 5:37 PM