I feel like I've been a totally scattered blogger lately, but I've been out of town pretty much every weekend, which means that I'm behind in every area of my life and I've been pretty inconsistent with Cuna. Poor thing only gets out 5 days a week. For shame!

I know, I'm an overachiever who needs to get over herself.

Despite a ridiculously long holdup, Cuna's winter blanket FINALLY arrived right before I left town on Friday. I was waiting for it to clip off Mr Fuzzy's yak coat, so I'm excited to be able to work on that now. Just need to find a couple of extra hours during the week... let me know if you hear of any. Seriously. My life=chaos.

The blanket came with a free halter, which I'm not complaining about. Since Cuna has the most beautiful halter in the world, I didn't think I'd use it, but halters at the new barn live in the elements. The beautimous halter is now living at home and the new halter is in use. 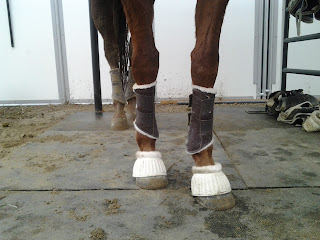 With the winter blanket came his fancy new bell boots. Because he gets boot rubs from pretty much everything and interferes without boots, I am basically screwed. Currently, I'm using fleecy boots as much as possible, but they have to be washed between uses and the wet weather is preventing any semblance of drying, plus then they freeze overnight. Awesome.

In hope of preventing bell boot rubs (which sound like their own special kind of hell), Cuna is now rocking the fleecy bell boots.

I'm not sure white is the right color to get a paddling horse (hellooooo obvious), but it looks good with the fleecy boots. Black is just wrong with brown boots.

Yesterday's ride was... different. The course set looked ginormous, so I thought we would hop over a crossrail a few times to get me confident. After 10 reps of said crossrail, with each ride getting successively worse, I decided I needed a new plan.

Put the crossrail to a vertical. Hm. That might work. All of a sudden, life worked again. I could ride forward, put my leg on, stay in balance, and not screw up my poor horse. Win!


Not sure what my problem was, but Cuna got lots of treats. I'm hoping to explore some hacking trails tomorrow. The lack of non-arena riding has been making me completely crazy and I think I'm starting to piss off Cuna, which is never a good thing. Of course, that means putting off clipping for another day. Again.
Posted by SprinklerBandit at 2:54 PM