I keep wanting to pretend that Courage is a horse other than who he is.

I tried to mix things up for him last weekend. I set a boring little crossrail and tried to pop him over it. Tried.
I also left off our beloved martingale for reasons best described as "inadequate" and the whole thing was a shit show. I thought mixing it up would help him settle down, but instead I broke our steering and half halts, so that's cool.

It's not like we're supposed to go to a show this weekend and put together a training level test.
Oh wait. We are!

I was planning on taking Courage to ALL THE SHOWS this month (literally like 4 of them), but due to unpredictable, uncontrollable life events, it appears that we will do this one training test at an event derby (so no ribbons for us) and then nothing. That makes me sad. I want to win all the things like last year and get all the exposure like last year.

After a couple careful days, I seem to have my half halts back, but my horse still can't turn right. Oh and we spent yesterday hacking on the buckle and trotting in a field because we could not arena, which was new.
So yeah. The part of me that isn't bummed we can't show is bummed because we also shouldn't show. Things aren't working. I can look at Courage historically and say May is always rough for us and June starts to smooth things out and I need to stop overreacting. So maybe that's what I should do. I know horse training is a process with ups and downs and just because we're on the downs vs the ups end of things doesn't mean I should throw in the towel. (Ha!)

It's hard to really, really want to work on something that seems simple (I dunno, leg yield?) and instead realize that trotting in a training level frame is about as good as it gets. And forget cantering, because no way no how.

What's more--I get off my admittedly difficult horse and want to have a breakdown because I'm so frustrated about all the things I'm screwing up. Then I go about my day and an hour or so later, I'm like "what's so wrong with needing a day to trot in the field?" 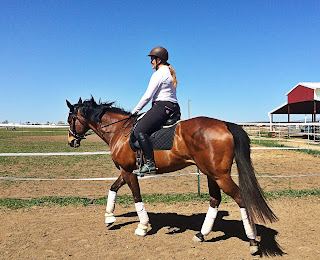 There is nothing wrong with that.

I guess the lingering question in the back of my mind is what bothers me the most--would I be a happier, more fulfilled rider if I had a horse that could take a little more pressure? A horse that wasn't a hodgepodge guessing game of will he/won't he play today? A horse with maybe less talent but less intelligence? 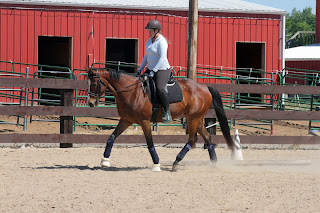 Or would I regret giving up my sound, talented horse with his big personality and the connection we've built?

And see, when I spell it out like that, it's easy for me. 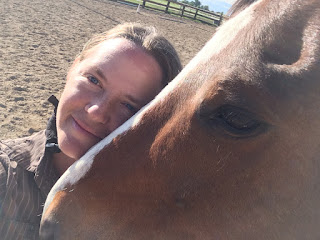 He's difficult. He pushes me. He's a cerebral ride.He doesn't tolerate a lot of mistakes. Whether I hit every show on the schedule or none of them, he's a horse I have to show up and ride every single day.

And whether I admit it or not, I like that.
Posted by SprinklerBandit at 7:00 AM