Anymore, I try not to do ride write ups. Courage and I aren't doing any cool tricks. Day in and day out is just simple consistency and giving him time to learn. We vary what we do--toodling days, hard dressage days, transition days, slow walk work days--whatever he needs in the moment. It's fascinating to ride, but not the most riveting reading.
Last week, we did a lesson with my trainer. Courage was on it and reasonably solid. I have some jumbled video I need to go through, but the most important part for me was riding through our tests. I did a sufficient First Level Test Two and then stopped to get feedback. Trainer pointed out that I rode the test, but I didn't set him up to be successful. It's not enough to do the movements on the paper. I have to think ahead and be proactive.
So we rode another test and she coached me through it. Instead of just trotting through the corner, then kicking for a lengthen, I had to shorten into the corner, coast through the corner, half halt out of the corner and then send him forward about three times per lengthen across the diagonal. Simple things like that. Also important: "on this horse, straight lines are not your friend".

It was one of those lessons that isn't earth shattering in what we worked on, but the principles needed to be reinforced for me. Not riding movements--riding the horse I have in the moment.
I felt like I made some great breakthroughs, but what made me even more excited was putting Courage on the lunge line later in the week. He's a horse that really does well with lots of ground work and lunging so he can figure himself out without a rider up, and it showed. Usually I take a zillion pictures of him and then root through them until I find one that looks good. 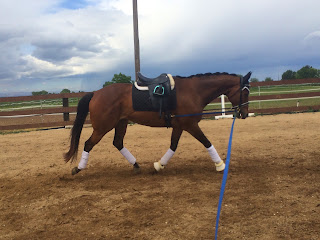 It was kind of magical--he kicked things into a whole new gear in the trot. He had to work through canter transitions a few times, but once he figured it out, he floated into the canter and then offered this amazing, slow, balanced, cadenced canter that I didn't even know he had.
Fascinating. Mysterious. Sexy. No wonder I still have this horse.

The next day I rode him.

I dunno what clicked for him, but there are gears in there I didn't know he had. Judging by his reactions, he didn't know either. He was powerful and forward and light and balanced and yes, of course I was riding alone with no witnesses.
See, Courage has this move he does usually in the right lead canter--if I sit too deep or ask for too much, he does this almost-invisible hop to get me out of the tack and let him stop loading his hind end. It's a strength issue and careful conditioning is making it a lot easier for both of us.

But that's how I knew the gear he dropped into was as surprising to him as it was to me--I was getting the "hop" while trotting to the left. THE LEFT. TROTTING. That's his good side in his easy gait.

I pushed my luck a little and asked for canter. He didn't quite magically lift into it like he did on the lunge line the day before, but when he got there? 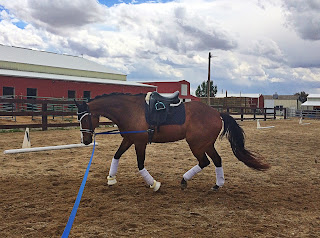 It's the canter dreams are made of. The canter that makes me forget galloping and jumping. It feels every bit as good as it looks and it looks freaking amazing (I mean, for first level for us, you know).

He's not strong enough to hold it for more than a lap or so of the small indoor arena, but not one time did he panic or flail.

This canter. <3 It was worth waiting for. We have a long ways to go to get strong and confident and consistent with this newfound level of awesome, but it is so freaking exciting to know it's in there for someday.